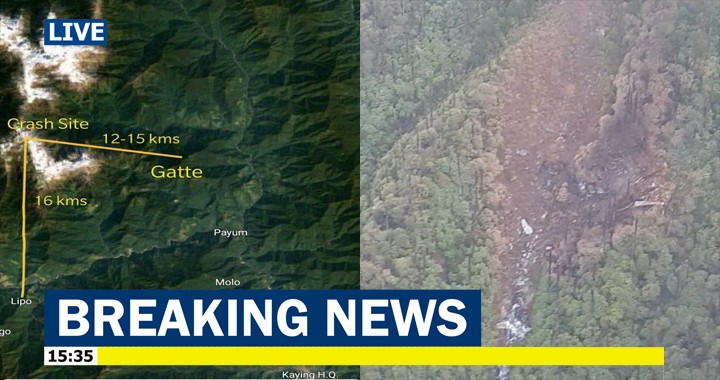 Almost a week after an intense search-and-rescue operation in Arunachal Pradesh, the wreckage of the missing Indian Air Force’s (IAF) AN-32 aircraft was spotted in Payum Circle of Siang district.

Here are the first visuals of the crash site, which shows debris from the aircraft scattered around the place and charred trees supposedly due to a big fire following the crash.

Visual of the wreckage of the missing AN-32 spotted earlier today 16 Kms North of Lipo, North East of Tato, at an approximate elevation of 12000 ft, in Arunachal Pradesh by the IAF Mi-17 Helicopter undertaking search in the expanded search zone pic.twitter.com/8ASt4uZXdE

The wreckage of the Russian-origin aircraft has been spotted, but the real challenge for the rescuers now will be to reach the site amid poor weather conditions.

Taking to Twitter, the IAF confirmed the development, saying, “The wreckage of the missing AN-32 was spotted on Tuesday (June 11) 16 kms North of Lipo, northeast Tato at an approximate elevation of 12000 feet by the IAF Mi-17 helicopter undertaking search in the expanded search zone.”

“After identification of the wreckage of AN 32 by Mi-17V5, the Cheetah of the IAF and Advanced Light Helicopter (ALH) of the Indian Army reached the crash site.

Due to high elevation and dense forest, helicopters could not land next to the crash site. However, the nearest landing site was identified and the rescue operation by helicopters will commence Wednesday early morning. Ground forces will continue to reach the crash site during the night,” tweeted IAF’s official handle.

The wreckage of the AN-32 aircraft with 13 people on board was located by a Mi-17 chopper in Arunachal Pradesh. The aircraft, carrying eight crew members and five passengers, took off from Jorhat in Assam at 12.25 pm on June 3 for the Mechuka Advance Landing Ground in Arunachal Pradesh.

Arunachal Pradesh Government officials: Map of the site where the missing AN-32 had crashed.
The Wreckage was spotted y'day 16 km North of Lipo, North East of Tato, at an approx elevation of 12000 ft,in Arunachal by IAF Mi-17 Helicopter undertaking search in expanded search zone pic.twitter.com/aaK0yvbyoo

The plane’s last contact with ground agencies was at around 1.00 pm on the same day.

A senior official of the district where the wreckage of the aircraft was spotted said, “It is likely to take some time for the ground parties to reach the crash site. The area has thick vegetation and the tough terrain often prevents the ground search party from advancing.”

However, as of now, nothing is clear about the fate of the 13 on board the aircraft.

The plane was traveling from Jorhat in Assam to a remote military landing strip in Mechuka in Arunachal Pradesh when it vanished from the radar around 1 pm on June 3.

IAF C-130J transport aircraft, Sukhoi Su-30 fighter jets, NAVY P8-I search aircraft and a fleet of IAF and Army helicopters had been searching for the aircraft. ISRO satellites and unmanned drones were also involved in the search operations.

The search was difficult because of the tough terrain and bad weather. The spot where the plane had been flying is mountainous and heavily forested; landing and take-off at Mechuka are extremely difficult. Coupled with erratic weather, the region is among the world’s most inhospitable for air transport.

The An-32 is a Soviet-designed twin-engine turboprop transport aircraft used extensively by the Indian Air Force for over four decades. Since it joined the IAF fleet, the rugged planes used to ferry people and air-drop supplies have undergone several rounds of upgrades.

Previous Analysis of Iran F-313 Qaher Stealth aircraft: Is it Real or Fake fifth-generation Fighter?
Next U.S. Air Force Almost Brought Back the iconic World War II Fighter Aircraft and it might even have replaced the A-10 Warthog