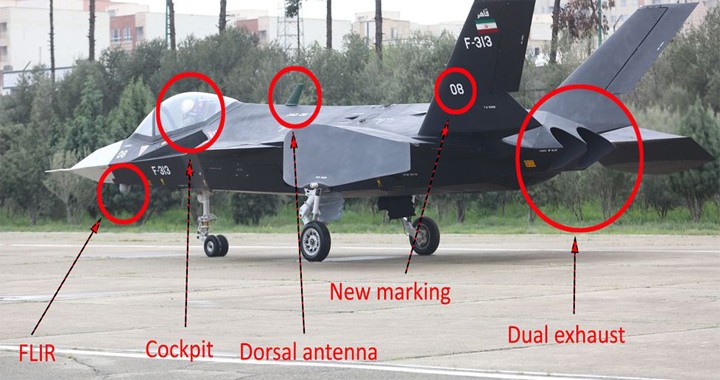 on Feb. 2, 2013, Iran recently released footage of what it claims is a fifth-generation stealth fighter jet called the Qaher F-313 rolling around a runway, being prepped for taxi tests

In April 2017 Footage and photographs showing a new prototype (marked “08”) of the Qaher F-313 stealth fighter jet emerged during Iran’s President Hassan Rouhani participation in an exhibition displaying the achievements that the Defense Ministry Brigadier General Hossein Dehqan gained during the past two years.

The New prototype was an “upgraded version” of the “faux stealth fighter” can be observed performing taxi tests. The aircraft appears to be slightly different from the one unveiled on Feb. 2, 2013, that was nothing more than a poorly designed mock-up that would never fly unless it was extensively modified and heavily improved. 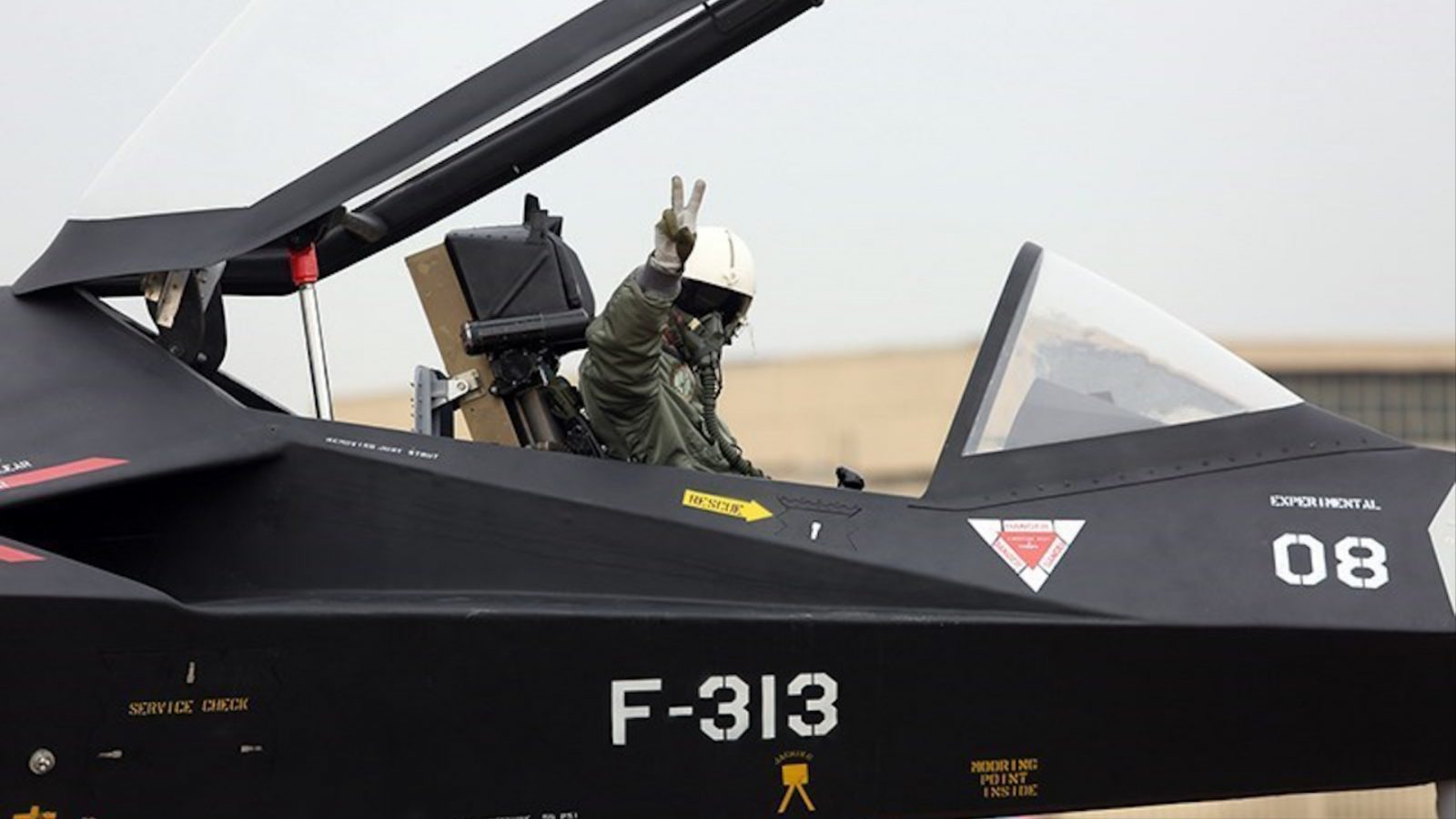 Here is an analysis by theaviationist.com on the second  prototype (marked “08”) of the Qaher F-313 stealth fighter jet

The new prototype retains the original weird shape but has a more realistic cockpit, large enough to accommodate an Iranian test pilot on an ejection seat, with a “normal” canopy, and a dorsal antenna.

It is equipped with dual exhaust nozzles: according to some sources these are U.S. engines, according to others these would be new turbofan engines or modified Iranian J-85s. And, interestingly, a sort of FLIR (Forward Looking Infra-Red) turret was attached to the nose of the aircraft, that also features a white radome.

Although the new prototype is not a complete joke as its predecessor, it is still pretty hard to say whether it will be able to take to the air and land safely without further modifications: the intakes continue to appear smaller than normal (as commented back in 2013, they remind those of current drones/unmanned combat aerial vehicles); the wing are small as well and feature the peculiar design with the external section canted downward whose efficiency is not clear. 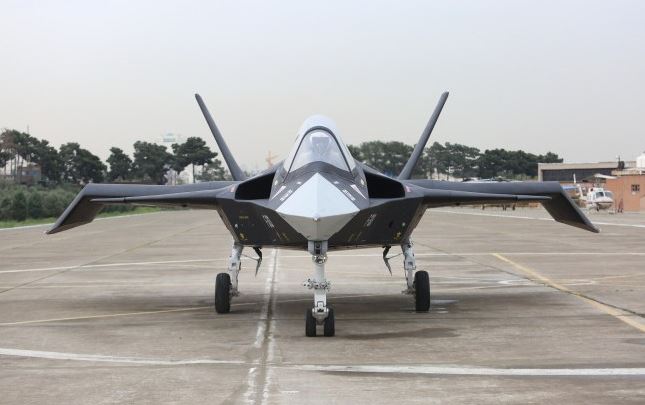 Here is an analysis by nationalinterest.org F-313 Qaher Stealth aircraft

While almost everyone outside Iran saw the project for the farce that it was, Tehran insisted that the project was real and that it was already flying.

Further, the Iranian government insisted that the bizarre-looking aircraft—which was allegedly superior to the Lockheed Martin F-22 Raptor and the F-35 Joint Strike Fighter—would become operational in the very near future.

The answer is nothing—as with much of Iran’s bluster—the Qaher F-313 was a ham-handed hoax. Even at the time when Iran first showed off the Qaher, it was clear that the mockup was little more than a poorly executed propaganda stunt engineered for domestic consumption.

From even a cursory examination of the many photos and video imagery of the aircraft with a purportedly ‘very small radar cross section,’ it was immediately apparent that this was not a serious development. At the very best, it is a subscale test-bed.

Perhaps the most immediate give away was the miniscule size of the craft. There didn’t appear to be room for avionics and fuel—let alone weapons. Moreover, it’s doubtful that there was an engine installed given the lack of a nozzle and the two tiny air inlets.

The other problem for Iran would have been to find an engine small enough to fit into such a miniscule airframe. Tehran’s options seem limited to something like the General Electric J85—which Iran has previously reverse engineered—but without a nozzle the heat would have likely set this mock-up ablaze.

Additionally, the cockpit appeared to be too small in relation to the pilot. And the visibility through the material could only be described as horrendous.

The cockpit instruments were amongst the only items in the Qaher F-313 that could be described as real. The Iranians were using instrumentation developed for the home-build aircraft market with hardware sourced from Dynon and Garmin. 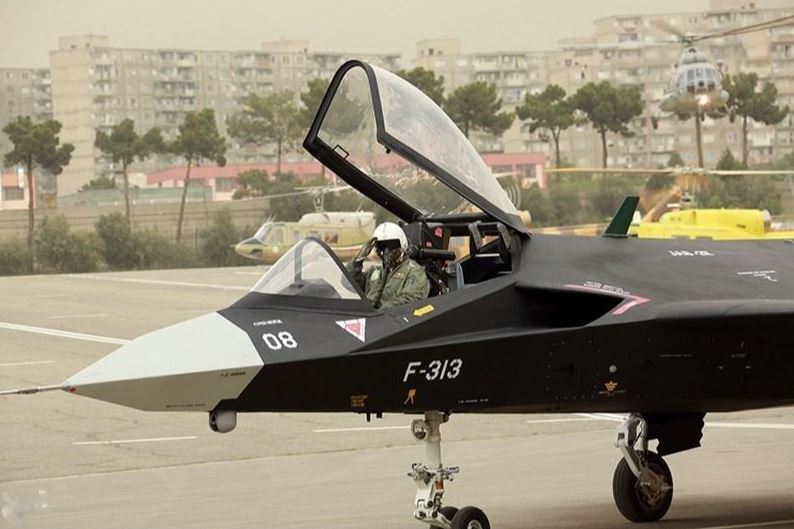 Furthermore, there were no access panels or weapons bays that were visible. Features such as access panels are found on every aircraft for routine maintenance. In the case of a stealth aircraft, internal weapons bays are necessary in order maintain the jet’s low observable signature while carrying armaments. But as one engineer familiar with low observables design astutely pointed out at the time, while superficially resembling what one might imagine a stealth aircraft to look like, the Iranian machine had serious radar cross section (RCS) problems.

Stealth aircraft design is much more involved than simply mastering the low observable shapes. There are advanced materials sciences that need to be developed for the aircraft’s skin and coatings. Advanced analytical tools are needed to shape the internal bulkheads and other structures. Moreover, one has to master the man-machine interfaces so that a pilot can manage the aircraft’s RCS spikes in flight. There is no evidence—now or back in 2013—that suggests that Iran has mastered those technologies.

So where is the Qaher F-313? It was spotted only once after its initial debut in November 2013 being prepped for taxi tests—but it has never been seen again. It’s likely the unimpressive mockup is sitting in the warehouse somewhere in Iran, or has been recycled for some other theatrical production.

The real mystery is—as it was then—how Iran’s leaders might assume that they could present such a farce before the eyes of the world and not invite anything other than mockery.

Four years ago, the cockpit was basic for any modern plane, the air intakes appeared to be too small, the engine section lacked any kind of nozzle meaning that the engine would probably melt the aircraft’s back-end. Above all, the aircraft was way too small to such an extent its cockpit could not fit a normal-sized human being.