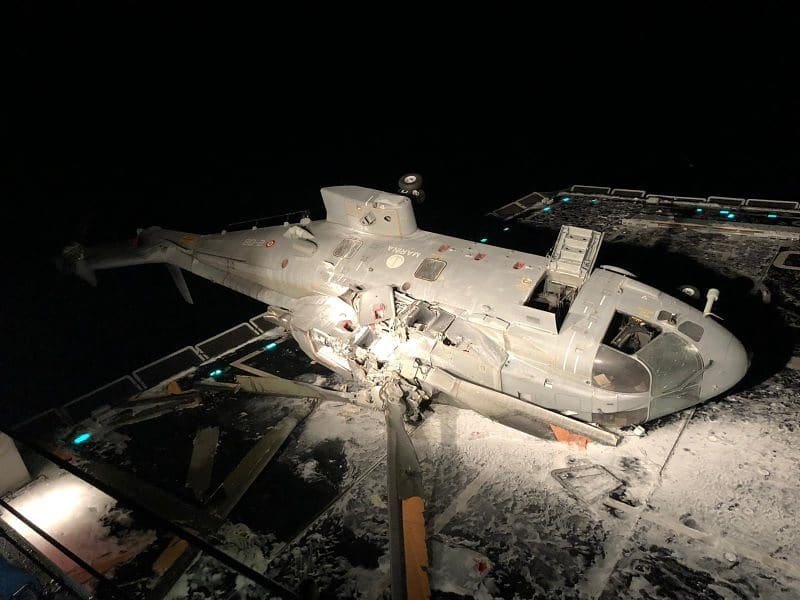 On Nov. 6, 2019, around 6.00 PM LT, An AgustaWestland SH101A of the Italian Navy (coded 2-08) crashed aboard the Horizon-class AAW destroyer Caio Duilio. The six crew members survived the crash.

According to the reports, the helicopter made a heavy landing on the flight deck of the ship at the end of a night training flight. Photographs released after the mishap by the local media show the Merlin (as the type is dubbed in UK service) resting on aside. The 6 helicopter crew members escaped safely and no one was hurt in the accident, that is currently under investigation.

The reason of the crash is under investigation.

Italian Navy's AW101 helicopter crashed during a training flight on Nov. 6 at 6.00 pm. The helicopter was operating with the destroyer Caio Duilio. During the accident, all six helicopter crew members survived and no one injured.
The reason of the crash is under investigation. pic.twitter.com/wgItZ84BxB

The AW101 is a medium/heavy platform capable of performing multiple tasks including Anti-Submarine and Anti-S
Warfare, Air-Naval Operations Command, and Control Search and Rescue (SAR) and Maritime Patrol/Assault.

The helicopter operates off three CT7-8E engines, with a two-engine cruise option to extend the endurance of the
multi-role platform to provide unparalleled performance in all environments.

The versatility of the AW101 platform permits customers to configure the helicopter for a wide range of primary and
secondary roles. Designed with sophisticated avionics and mission systems, coupled with long-range and endurance
provides operational persistence for all missions. This mission flexibility makes the AW101 the most advanced, vers
and capable multi-role helicopter available today.

The AW101 design’s harnesses technologies from the forefront of an industry that is fully integrated throughout the
avionics and mission suite to deliver exceptional situational awareness, rapid tactical assessment, and ultimate mis
effectiveness.

The AW101 provides customers with greater mission flexibility thanks to a comprehensive range of equipment that
enables the platform to be configured for swing role operations. The large sliding door and rear ramp ensure rapid
personnel ingress/egress and equipment loading/unloading.

The “Caio Duilio” is the new Anti-Air Warfare destroyer belonging to the Horizon Common New Generation Frigate (CNGF) programme, which involves cooperation between Italy and France for the construction of two vessels for the fleet of each national Navy. The ship was taken on charge by the Marina Militare (Italian Navy) on Apr. 3, 2009 and is equipped with a Sylver vertical launcher for 48 Aster 15 and 30 missiles, autonomous Command and Control capabilities, LRR S-1850 M long range radar, and PAAMS (Principal Anti Air Missile System) based on Windows 2000 software with an EMPAR multi-function radar. Interestingly, it was designed with straight lines that give the unit some stealth (low observability) capabilities.

Previous U.S. To Purchase 478 More F-35 Fighter Jets At Around $71M Apiece
Next U.S. Air Force Airman Missing After Accidentally Falling From A Plane Into The Gulf Of Mexico