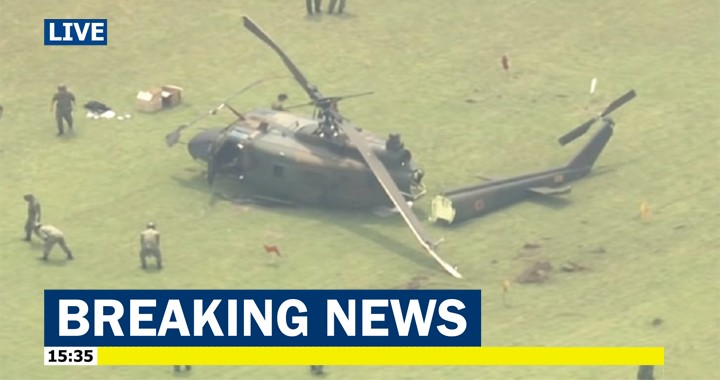 A Japan Ground Self-Defense Force (JGSDF) UH-1J military helicopter made a hard landing at Tachikawa air base on 21 June.

The helicopter sustained a hard landing. The accident occurred probably during the practice of the autorotation landing by the copilot.

The two crew members were not injured.

The UH-1J helicopter was being flown in an emergency landing training exercise when it came down at Camp Tachikawa at around 9:55 a.m. The chopper was split in half and its main rotor damaged. No fire was reported at the scene.

A pilot and co-pilot were on board at the time of the accident, according to the GSDF.

“We apologize for making residents in the neighborhood anxious,” Defense Minister Takeshi Iwaya said at a news conference.

The UH-1J (UH-1Hs built by Fuji in Japan for the Japan Ground Self-Defense Force), assigned to the Eastern Army Aviation Group, was forced to land at 9:57 a.m. during training at Camp Tachikawa, the spokesman said.

The two crew members of the downed helicopter were not injured in the accident, which broke the aircraft in half, the spokesman said.

An aerial photograph of the crash site published by the Yomiuri Shimbun shows the helicopter’s tail separated from its cabin.

Japan’s military is investigating the accident, the spokesman said.

According to the local news, it seems that it failed during the practice of the autorotation landing by the copilot.

Previous Iran released the first video of the purported wreckage of downed U.S. drone
Next Trump reportedly signed off military strike on Iran, Then Abruptly backed out with planes in the air