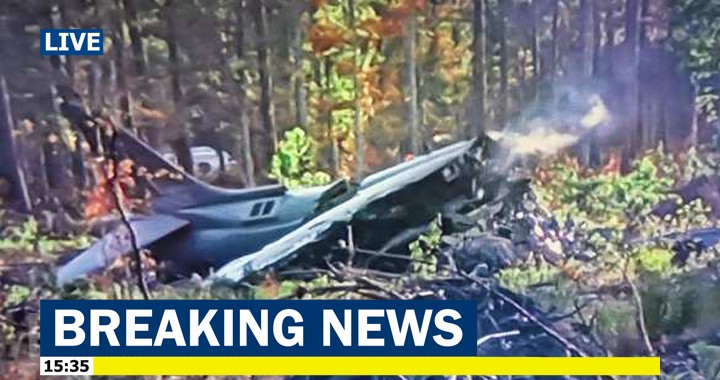 Aircraft went down around 6:15 pm local time.  The pilot ejected safely from the aircraft, according to Marine officials.

The pilot is being taken to Carolina East Medical Center in New Bern, North Carolina.

Photos sent to us from viewer Amber Lynn Onizuk showed the pilot walking around and even talking on a cell phone. He was taken to CarolinaEast Medical Center in New Bern.

There are currently no reports of civilian casualties or property damage, a command release said.

The Havelock Sheriff Department responded to the incident and were later supported by personnel from 2nd Marine Aircraft Wing, the command release detailed.

The site of the crash has been cordoned off and the incident is under investigation, the release said.

This mishap follows two other Class A mishaps within Marine Corps Aviation this month. On May 3, an F/A-18D Hornet had an engine bay fire during a post-maintenance check flight. The aircraft was landed on an airfield and the aircrew was not injured

On May 6, an F-35B Lightning II Joint Strike Fighter had to abort a takeoff due to a bird strike. There were no injuries or damage to nearby infrastructure, but due to the complex and expensive engine and fans that allow for vertical takeoff, the bird strike caused more than the $2-million threshold of damages to the plane.

The Navy too suffered a Class A aviation mishap this month, when on May 10 a T-45 Goshawk training aircraft had an engine failure on final approach to the runway at Naval Air Station Kingsville, Texas. The student and instructor pilots both ejected safely.

Previous 1,500-plus U.S. Marine Corps Aircraft have suffered Bird strikes in the past 15 years
Next Budgam helicopter crash: IAF officer removed & could face the charge of culpable homicide