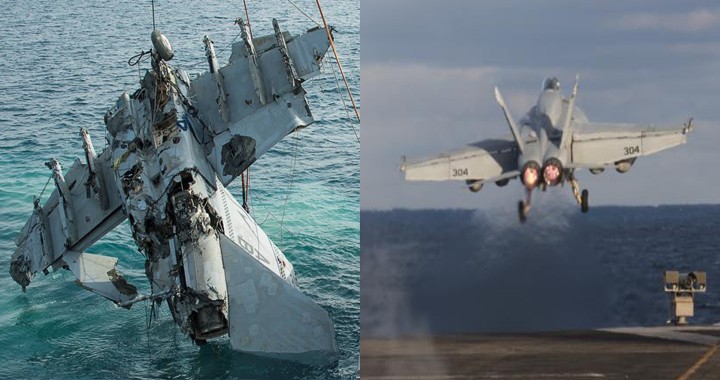 Its two crew members ejected and were rescued by a US military helicopter, he told AFP, adding the accident was “not life-threatening”.

A F/A-18 from Carrier Air Wing (CVW) 5 experienced a mechanical issue resulting in the crew ejecting. The crew was immediately and safely recovered by USS Ronald Reagan (CVN 76).

The F-18, part of Carrier Air Wing 5 onboard the USS Ronald Reagan, experienced a “mechanical issue that resulted in the crew ejecting” while carrying out “routine operations” from the Nimitz-class supercarrier, the US Navy 7th Fleet said.

The Navy said the pilots are in good condition and were evaluated by medical personnel after their rescue. They said the crash is now under investigation.

The USS Ronald Reagan has now resumed normal operations after the incident, currently supporting “security and stability in the Indo-Pacific region,” the Navy said.

The cause of the crash is under investigation.

Japan’s coastguard “dispatched an aircraft to the waters to see if there is any debris or floating oil”, a coastguard spokesman told AFP.

Okinawa accounts for less than one percent of Japan’s total land area but hosts more than half of the approximately 47,000 American military personnel stationed in Japan.

For decades, Okinawa residents have asked for some of the bases to be moved, with resentment growing after a string of ac

Okinawa hosts US military bases and thousands of personnel.

This is the second recent incident involving the USS Ronald Reagan. In mid-October a US Navy MH-60 Seahawk helicopter crashed on the flight deck of the carrier, injuring 12 people.

The US 7th Fleet, which stays deployed in the Asia-Pacific region, is made up of at least 50 ships and submarines at any given time, along with 140 aircraft and some 20,000 sailors.

Legacy Hornets have also crashed at an alarming rate as we have already reported in the past:

Previous Super Powerful US B-1 Lancer Afterburner in Action During Superb Flight
Next Tom Cruise will fly Aircraft for Top Gun: Maverick, but not F/A-18s