An Embraer A-29B Super Tucano crashed under unknown circumstances. The pilot ejected safely. The pilot is believed to be an American national.

The mishap occurred in the Doshi district of Afghanistan’s northeastern Baghlan Province at approximately 11:30 AM local time on July 9, 2020.

U.S. Forces-Afghanistan said the pilot was recovered after the crash. While the cause of the mishap is under investigation, preliminary indications show mechanical issues are to blame. USFOR-A did not disclose where the crash occurred.

“The A-29 had an American onboard, unclear if flying the aircraft alone or with an Afghan, according to those familiar with the crash,” New York Times reporter Thomas Gibbons-Neff wrote on Twitter.

An unconfirmed video has also appeared on Twitter showing Afghan Air Force Mi-17 Hip helicopters responding to the crash to rescue the pilot. There are also reports that the pilot ejected from the aircraft.

The A-29 was assigned to the Kabul Air Wing based at Hamid Karzai International Airport in the country’s capital, Kabul.

The Afghan Air Force presently has 25 A-29s, 10 of which are based in the United States as part of a pilot training program.

They are armed with two .50 caliber machine guns and can carry various types of ordnance, including laser-guided bombs, on four hardpoints under the wings and another one under the center of the fuselage.

The turboprop A-29, provided by Embraer and Sierra Nevada Corp., is the Afghan Air Force’s main light attack aircraft used for close air support. A-29s have two seats, but can be flown by one pilot.

USAF leads Kabul-based train, advise, and assist efforts that are building up the AAF’s capabilities in the A-29. Afghan forces have 25 A-29s in-country, with 10 more at Moody Air Force Base, Ga., for training. Nearly 30 Afghan pilots are qualified to fly the airframe.

This is the first A-29 crash since a pilot died in a June 22, 2018 incident near Holloman Air Force Base, N.M., during the Air Force’s own experiment with light attack aircraft. 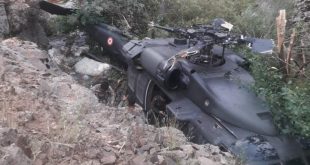