The Biden administration had put a temporary hold on billions of dollars in arms sales to the United Arab Emirates (UAE) and Saudi Arabia. A State Department representative called the move a “routine administrative action” noting that it was standard for incoming administrations to review large arms deals initiated by outgoing administrations.

On Jan. 20, 2021, A Few hours before Biden’s inauguration, “the UAE has signed an agreement with the United States to purchase to 50 F-35 joint strike fighter aircraft and 18 MQ-9 Reaper drones. On December 29, the State Department also approved the potential sale of 3,000 precision-guided missiles, worth as much as $290 million, to Saudi Arabia.

Both sales were harshly criticized by Democrats in Congress.

“The department is temporarily pausing the implementation of some pending US defense transfers and sales under Foreign Military Sales and Direct Commercial Sales to allow incoming leadership an opportunity to review,” the State Department said in a statement.

“When it comes to arms sales, it is typical at the start of an administration to review any pending sales, to make sure that what is being considered is something that advances our strategic objectives and advances our foreign policy,” Secretary of State Antony Blinken said later Wednesday at a press briefing.

Less than a month after the UAE sale was announced, an effort to block the deal fell short in the Senate, which failed to halt it.

Senators argued the sale of the defense equipment had unfolded too quickly and with too many questions. The Trump administration billed it as a way to deter Iran, but the UAE would have become the first Arab nation — and only the second country in the Middle East, after Israel — to possess the stealth warplanes.

The Biden administration did not elaborate on what other deals it might be reviewing. 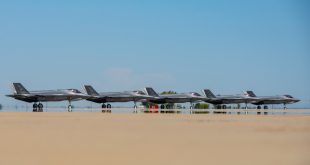