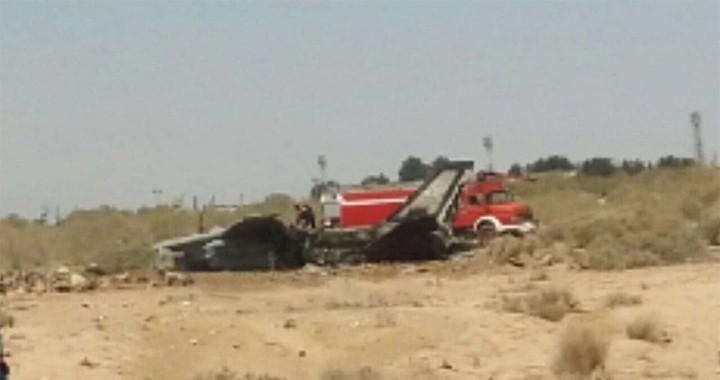 on May 14, 2019, at Iranian Air Force F-14A Tomcat Fighter jet Crashed at Isfahan air base during landing

It seems that the aircraft involved is F-14A 3-6003. According to the picture of the fatal Tomcat, the airframe is completely destroyed.

The IRIAF F-14A from the 8th Tactical Air Base crashed while it was landing. The aircraft reported an emergency to air traffic control during its training flight, subsequently, the fighter was approved to make a quick landing at Esfahãn, but the aircraft was not able to hold position and skidded off the runway.

Both pilot and Radar Intercept Officer (RIO) were forced to eject.

It is said that the IRIAF only have some twelve to fourteen operational F-14A and F-14AMs left. The IRIAF faces large problems to keep their Tomcats in the air (the AM version is locally modified and equipped with new avionics and multi-function displays in the cockpit, countermeasure systems, radar warning receivers and an inertial navigation system).

In January 2007, U.S. Department of Defense (DoD) announced that sales of spare F-14 parts would be suspended over concerns of the parts ending up in Iran and in Jul. 2007 the remaining U.S. F-14s were shredded to ensure that any parts could not be acquired.

However, in Oct. 2010 IRIAF commander stated that his country was overhauling its F-14s and mentioned that Iran-made radar system had been installed on the fighter.

Moreover in the summer of 2010, Iran requested that the U.S. deliver the 80th F-14 it had purchased in 1974, but delivery was denied after the Islamic Revolution.