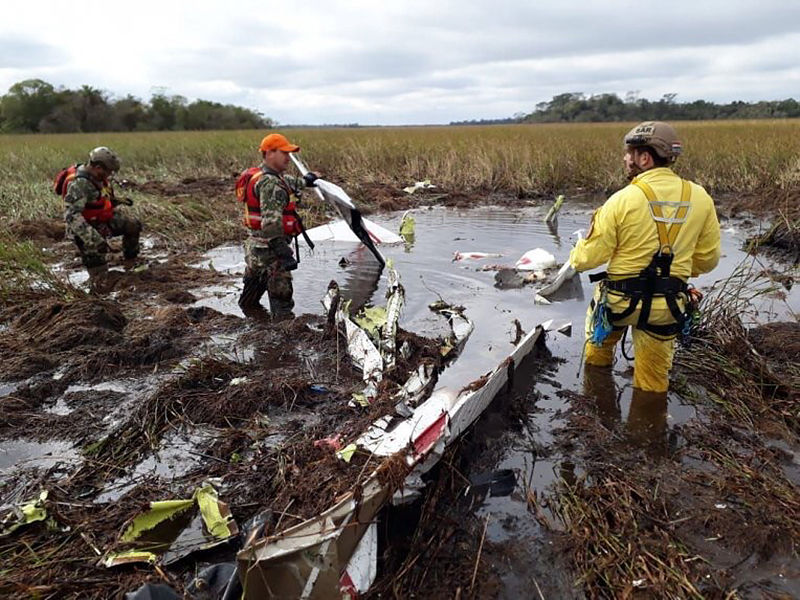 The aircraft, a Baron 58 with registration ZP-BEU assigned to the Ministry of Agriculture and Livestock (MAG), took off from the air base of Ayolas, Misiones department, at 6:22 pm, when it had already darkened and a light drizzle fell.

Civil Aeronautics official Ruben Aguilar says the twin-engine Beechcraft Baron went down in a marshy area shortly after taking off Wednesday night from the airport in Ayolas, some 235 miles (380 kilometres) south of the capital, Asuncion.

The security camera of the airport recorded the first three minutes of the flight until the machine made an unusual turn, there was a flash, then a blackout, an alleged reactivation of the light circuits and, finally, the ship disappeared from the radar.

The control tower definitely lost contact with the machine six minutes after takeoff.

After observing a CCTV recording of Ayolas airport, where it is perceived that apparently, the aircraft carrying Luis Gneiting and other occupants rushed to land, police authorities in that area launched a search operation on the stellar where the airplane.

The information was given by the Minister of the National Emergency Secretariat (SEN), Joaquín Roa, during an interview with Radio 970 AM.

“CCTV was observed and it was seen that the plane returned to the airport runway of Ayolas. The lights go out, they turn on again and start to descend abruptly and nothing is seen in the images. We do not know what happened. The area is wide. A search is being organized, “said Roa.