A helicopter of the Fuerza Aérea Hondureña (FAH) was hit by several bullets in an armed conflict with drugs traffickers.

A helicopter from the Armed Forces of Honduras received multiple bullet holes during a new armed confrontation that took place with members of drug gangs in the area of ​​La Mosquitia Honduras in Gracias a Dios.

It all started when the air team with the support of intelligence agencies assured that a narco-plane with an air trace from South America bound for La Mosquitia.

The authorities immediately activated the protocols on the land, air and maritime shield at 12:45 p.m. at a distance of 704 nautical miles east of Cape Gracias a Dios.

The aerial trace was intercepted and tracked at suspected landing sites 29 kilometers southeast of Brus Laguna near Laguna Rápola, according to the report.

During the seizure of the narco-plane, a shootout by cells linked to drug activity was reported. One of the helicopters participating in the operation received bullet holes in the fuselage.

No injuries or detainees were reported, only the seizure of the aircraft which was incinerated, therefore, it is presumed that residents of the area took the drugs.

The spokesman for the National Inter-Institutional Security Force (Fusina), José Coello, explained that so far this year they have intercepted 9 planes with drugs, 306 since 2014, in addition to eight boats and more than 300 vehicles.

The seizure of more than 2.5 tons of cocaine is also confirmed. La Mosquitia has for years registered a strong activity in drug trafficking activities, only this year 34 clandestine landing strips have been disabled. 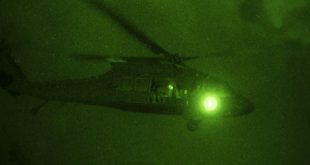