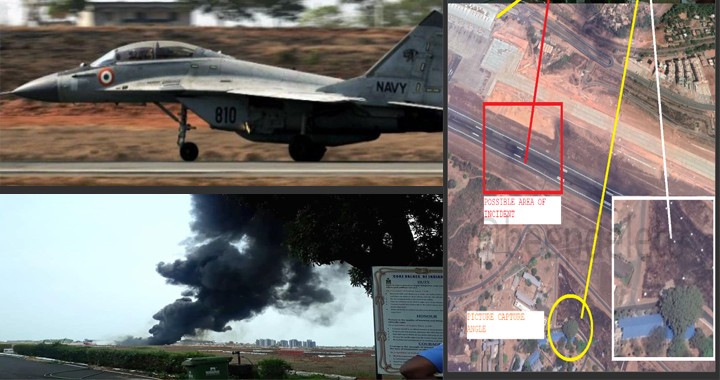 Goa Airport has been temporarily closed after an incident caused by a “drop tank of MiG 29K which got detached whilst taking off”, the Indian Navy spokesperson said on Twitter.

Civilian flight operations resumed after one and a half hours at the airport.

No one was injured in the incident.

According to a spokesperson for the airport, Indian Navy personnel promptly arrived at the site, “cleaning the fuel from the runway and carrying out repair along the stretch”.

“These are external fuel tanks outfitted to aircraft in order to enable them to cover more distance. One such tank attached to a MiG-29K got jettisoned off the jet during a sortie and landed on the runway”, the spokesperson stated.

The Indian Navy has published photos of the black fumes rising from the place of the fire.

Flash. #GoaAirport closed temporarily for a few hours view incident of fire caused by a drop tank of MiG 29K which got detached whilst taking off. All efforts in hand to resume flights ASAP. MiG 29K fighter ac is safe. @aaigoaairport @AAI_Official pic.twitter.com/5iDRT8r6BX

The incident took place at around 1 pm today after a portion of the main runway of the airport caught fire.

The external fuel tank of the aircraft got jettisoned inadvertently on the runway while the plane was taking off for an operational mission from Dabolim airfield, the Navy Spokesperson said.

The fire erupted due to fuel spillage.

The MiG-29K fighter jet that dropped the fuel tank is safe.

Fighter jets often carry fuel tanks that can be detached as per mission requirements.

He also said emergency services were immediately pressed in to quickly re-operationalise the runway.

Flights were affected too and from the airport of the coastal state which is heavily dependant on tourism.

About seven flights from different parts of India that were supposed to land at Goa Airport have been redirected to Mangaluru Airport in Karnataka.

Goa Airport is the area’s single international airport located in Dabolim, 4 km from the nearby city of Vasco da Gama, 23 km from Margao, and about 30 km from the state capital Panjim. It operates as a civil enclave in a military airbase named INS Hansa.