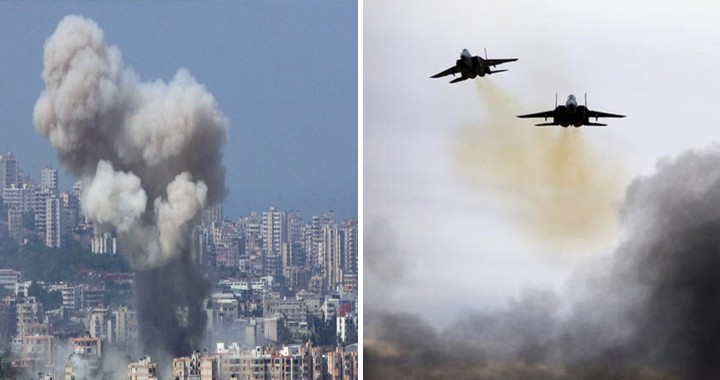 Lebanon’s state-run National News Agency says Israeli warplanes have attacked a Palestinian base in the country’s east, near the border with Syria.

The report says there were three strikes early on Monday, minutes apart, that struck a base for a Syrian-backed group known as the Popular Front for the Liberation of Palestine — General Command.

The strikes came a day after two drones, which the Lebanese army and Hezbollah said were Israeli, crashed in the Hezbollah-dominated southern suburbs of Beirut, with one exploding.

A position of the Popular Front for the Liberation of Palestine-General Command near Qusaya was hit, the state-run National News Agency reported.

The group responded with a barrage of anti-aircraft fire, it added. There were no reports of any casualties and the Israeli military did not comment.

The PFLP-GC has been operating in Lebanon for decades and has close ties to the Syrian government, whose forces it has supported in the country’s eight-year civil war along with Hezbollah.

“This aggression is a continuation of what happened in Beirut and a provocative attempt that is a direct reaction to Nasrallah’s statements,” Khaled Jibril, a PFLP-GC official, told al-Mayadeen TV.

Following a series of Israeli strikes on Syria, Lebanon and Iraq, the situation escalated in the Gaza Strip.

Three rockets were launched from Gaza towards southern Israel at around 9 PM local time on August 25th, Israel Defense Forces (IDF) reported. Two of the incoming projectiles were intercepted by the Iron Dome missile defense system.

There were some injuries and no fatalities. One rocket exploded next to the Route 34 highway in southern Israel, sparking a fire, according to local authorities.

3 rockets were fired from #Gaza at #Israel. 2 of the rockets were intercepted by the Iron Dome Aerial Defense system.

Shrapnel from an Iron Dome interceptor missile struck an empty building in the town of Sderot, causing damage, the municipality said in a statement.

The barrage interrupted a large concert in Sderot, known as Sderot Live. There were no injuries and the event simply ended early.

“Israel Police officers are working to disperse participants of the event in a way that is orderly to prevent danger to human life,” police said.

No group has claimed responsibility for the launches, but Times of Israel reported that Palestinian media had reported Hamas was abandoning its positions in anticipation of an IDF response.

“Fighter planes attacked several terror targets in Hamas’ military compound in northern Gaza, including the office of a Hamas commander battalion,” the IDF Spokesperson’s Unit said in a statement.

“The strike was carried out in retaliation for the rockets launched from Gaza on Sunday evening. The Israel Defense Forces will continue acting against attempts to harm Israel’s citizens and views the Hamas terror organization responsible for everything that takes place in the Strip,” the statement read.

According to the Palestinians, the IDF hit targets belonging to Hamas’ military wing, the Al-Qassam Brigades. No casualties were reported.

A Hamas spokesperson further said that the group didn’t carry out the launches in the evening.

The Coordinator of Government Activity in the Territories, IDF Maj. Gen. Kamil Abu Rokon, announced that Prime Minister Benjamin Netanyahu, who is also serving as Defense Minister, decided to cut oil imports intended for Gaza’s power station by a half in response to the rocket fire.

In possible response, the IDF Air Force reportedly carried out a strike on a base belonging to a Palestinian “terrorist group” deep inside Lebanon.

Allegedly the group is based in Syria and fights alongside the “Bashar al-Assad regime’s” forces. The base is located in the Bekaa Valley in eastern Lebanon, near the border with Syria.

A spokesman for the group told the Saudi-owned Al-Hadath news channel that the “Israeli bombing in the Bekaa did not achieve its objectives,” but gave no further details.

That’s essentially a rumour right now, since there has been no confirmation by the IDF.

In past cases of strikes in the Bekaa Valley, it was to stop allegedly weapon shipments to Hezbollah from Iran, going through Syria.