According to the Israeli military’s claims, operatives of the Iranian Islamic Revolutionary Guard Corps (IRGC) Quds Force and affiliated units were preparing to launch several armed drones at Israeli positions.

“The IDF [Israeli Defense Forces] is prepared to continue defending the State of Israel against any attempts to harm it and holds Iran and the Syrian regime directly responsible for the thwarted attack,” the Israeli Air Force (IAF) wrote on Twitter.

Syrian sources reported several explosions in the vicinity of Damascus in the late hours of August 24. Several anti-aircraft missiles were also launched by the Syrian Arab Air Defense Forces (SyAADF).

#BREAKING: The IDF attacked a number of terrorist targets southeast of Damascus in Syria against Iranian Quds operatives and Shiite militias that planned to launch a number of armed drones against Israeli targets – @IDFSpokesperson pic.twitter.com/umhAY943v5

“At 23:30 our air-defense systems detected hostile targets coming from above the Golan Heights towards the vicinity of Damascus … So far, most of the hostile Israel missiles have been destroyed before they could reach their targets,” the official said.

Mayors in northern Israel were also warned of the potential for retaliatory strikes by Iranian forces.

Following the IDF’s confirmation of the strike, Prime Minister Benjamin Netanyahu said: “I repeat: Iran has no immunity anywhere…I have given the instruction to prepare for any scenario. We will continue to act against Iran and its proxies with determination and responsibility on behalf of Israel’s security.”

The latest strike comes amid accusations of Israel conducting airstrikes against Iranian targets in Iraq in recent weeks. 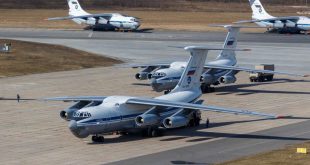 At the Chkalovsky airfield in the Moscow region, 9 Il-76 aircraft of the Russian military …