As we have reported earlier today that Chinese Fighter Jet and Bomber Approached Taiwan’s Airspace 8th Time In Last 2 Weeks.

Subsequently, there have been no violations of the Japanese state borders.

The Chinese electronic surveillance aircraft is based on the airframe of the new Y-9 transport aircraft. The design incorporates high-mounted wings with drooping outer wing panels. The aircraft is recognisably different from the baseline transport aircraft in that it has several appendages and other fairings attached to its upper and side fuselage, and atop the tail.

The Y-9JB aircraft is equipped to monitor communications traffic and radar emissions. Also, the Chinese spy plane was fitted with improved cabin pressurization for operations in higher altitudes and has also been equipped with upgraded electronic systems, including new fairings and antennas. 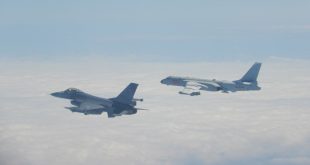