At least 63 people have been killed and nearly 3,000 wounded in a powerful explosion that ripped through Lebanon’s capital, Beirut.

The massive explosion at Beirut’s port sent shockwaves across the city, causing widespread damage to buildings and shattering windows even on the outskirts of the capital.

The cause of the explosion was not immediately clear. Mohammed Fahmi, Lebanon’s interior minister, said it was apparently caused by ammonium nitrate that was stored in a warehouse at the port.

Video footage and images available show significant damage, even well away from ground zero, with windows and glass doors shattered in various areas of the city. Injuries have already been reported.

Video and pictures are now emerging of the aftermath of the explosion, which looks to have been absolutely devastating. Some sort of conflagration in a warehouse on the dock itself may also have been the epicenter of at least one of the blasts.

Prime Minsiter Hassan Diab promised that “what happened will not go without accountability”. An investigation into the explosion was announced by Lebanese Prime Minister Hassan Diab. The probe will include “revelations that will be announced about this dangerous warehouse which has been present since 2014,” he said, without providing any additional details.

A red cloud hung over the city in the wake of the explosion, which took place just after 6pm local time (11am ET), as firefighting teams rushed to the scene to try to put out the fire. Footage from the scene captured the injured staggering through streets in the capital; and ambulances, cars and military vehicles packed with the wounded. One eyewitness described the scenes as “like an apocalypse.”

Health Minister Hamad Hassan called for international aid to Lebanon, and a number of nations in the West and the Gulf have said they were willing to provide assistance.

Hospitals are said to be overwhelmed and many buildings have been destroyed.

The blast was heard 240km (150 miles) away on the island of Cyprus in the eastern Mediterranean.

The explosion comes at a sensitive time for Lebanon, with an economic crisis reigniting old divisions. Tensions are also high ahead of Friday’s verdict in a trial over the killing of ex-Prime Minister Rafik Hariri in 2005. 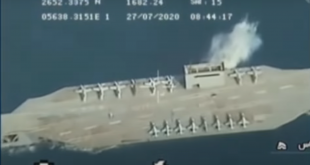