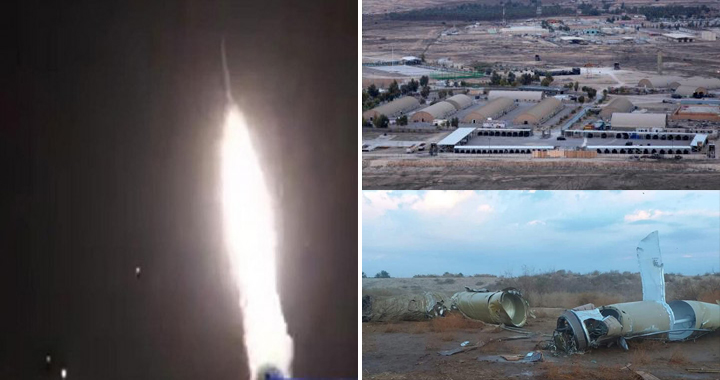 Iran has carried out Operation Martyr Soleimani: a ballistic missile attack on airbases housing U.S. forces in Iraq, in retaliation for the U.S. killing of General Qasem Soleimani.

More than a dozen missiles launched from Iran struck two air bases in Irbil and Al Asad, west of Baghdad. It is unclear if there have been any casualties.

Two Iraqi bases housing US and coalition troops were targeted, one at Al Asad and one in Irbil, at about 02:00 local time on Wednesday (22:30 GMT on Tuesday). It came just hours after the burial of Soleimani, who controlled Iran’s proxy forces across the Middle East.

Just hours after the missile strikes a Ukrainian airliner crashed in Iran shortly after take-off. There is no evidence that the two incidents are linked.

An official statement has been released by the Assistant to the Secretary of Defense for Public Affairs Jonathan Hoffman:

We are working on initial battle damage assessments.

In recent days and in response to Iranian threats and actions, the Department of Defense has taken all appropriate measures to safeguard our personnel and partners. These bases have been on high alert due to indications that the Iranian regime planned to attack our forces and interests in the region.

As we evaluate the situation and our response, we will take all necessary measures to protect and defend U.S. personnel, partners, and allies in the region.

Due to the dynamic nature of the situation, we will continue to provide updates as they become available.

Videos of the missiles have already started to circulate on social networks:

Another video showing multiple missiles been launched from #Iran into the #Iraq from Kermanshah. pic.twitter.com/sHBMyShrOF

Iran’s Supreme Leader Ayatollah Khamenei said the attack was “a slap in the face” for the US and called for an end to the US presence in the Middle East.

Echoing him, President Hassan Rouhani said Iran’s “final answer” to Soleimani’s assassination would be to “kick all US forces out of the region”.

White House aides had initially made plans for a possible address to the nation by Trump after the missile strikes, according to two officials, but a White House official said the President would not speak immediately.
Trump later tweeted, “All is well! Missiles launched from Iran at two military bases located in Iraq. Assessment of casualties & damages taking place now. So far, so good! We have the most powerful and well equipped military anywhere in the world, by far! I will be making a statement tomorrow morning.”
Share