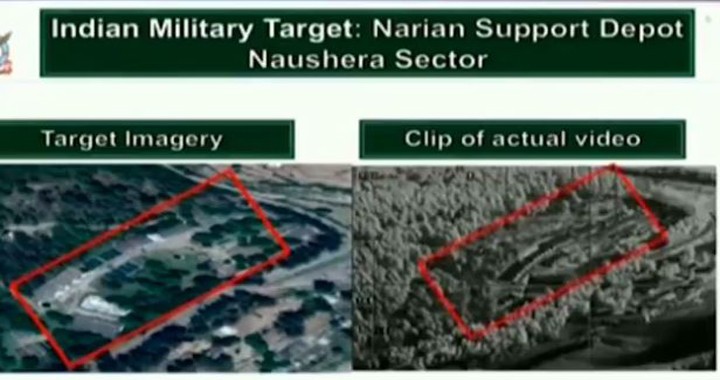 The Pakistani Air Force has released a media presentation on ‘Operation Swift Retort’, the military operation conducted on February 27, 2019, in retaliation to the Indian Air Force’s strikes on a militant camp in Pakistan on February 26.

In its presentation, PAF released “actual footage” of one of the Pakistani bombs being dropped outside the Indian Army’s Narian Ammunition Depot.

PAF said it targeted the Narian base, but “dropped the bombs 400 m from target” as a show of strength, to avoid escalating the situation any further.

The footage was one of four targets where the air force dropped six bombs on February 27, it claimed.

“This is the actual clip of the bomb which is being directed towards this target,” a PAF spokesperson said, while footage appearing to be recorded from the missile’s onboard camera was showed approaching its target.

The PAF also displayed photos of the wreckage of the Indian MiG-21 Bison downed during the February 27 skirmishes.

PAF claimed all of its data was “available for independent verification.”

On 27 February 2019, Pakistan Air Force (PAF) conducted six surprise airstrikes at multiple locations in Indian-Administered Jammu and Kashmir (J&K). The airstrikes were part of PAF military operation codenamed Operation Swift Retort and were conducted in retaliation of Indian Air Force (IAF) airstrike in Balakot just a day before on 26 February.

It was the first time since 1971 that both countries airforce had crossed Line of Control (LoC) to conduct airstrikes on the opposing territories.

In the resulting dog fight, Pakistani officials claimed to have shot down two Indian jets and captured one Indian pilot. Indian officials initially rejected that any of the IAF jet was shot down.

Pakistan rejected Indian claims and said that PAF did not suffer any losses in the dog fight. Pakistani officials claimed that “in this day and age, it is impossible to hide downing of aircraft”.

One IAF Mil Mi-17 helicopter was also lost as a result of friendly fire, killing everyone aboard.