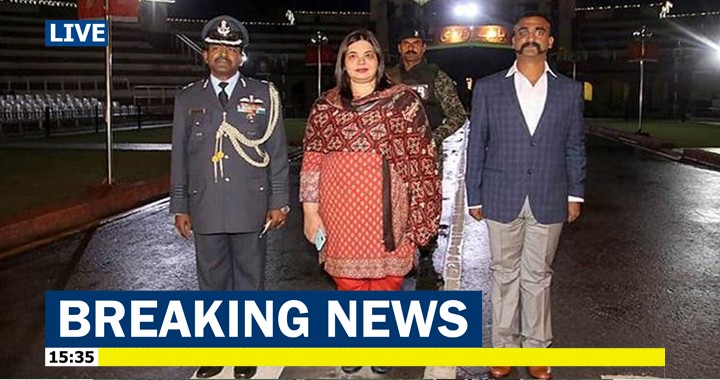 Earlier, Indian acting High Commissioner arrived at the Foreign Office where he was formally informed about handing over Wing Commander Abhinandan Varthaman.

Shortly after he was handed over to Indian authorities at Wagah, Pakistan Foreign Office said “The captured Indian Air Force Wing Commander Abhinandan Varthaman has been returned to India today. He was arrested when his military jet MIG-21 crashed in Azad Jammu & Kashmir after being shot down by Pakistan Air Force for violating Pakistani airspace on February 27, 2019.”

Prime Minister Imran Khan, while addressing a joint sitting of the parliament on Thursday, announced the release of the captured Indian pilot today (Friday) as a peace gesture and the first step towards de-escalation of the ongoing tension between the two countries.

“We are going to release the Indian pilot tomorrow as a goodwill gesture and gesture of peace,” Imran Khan said towards the end of his address.

The nation is proud of your exemplary courage.

Our armed forces are an inspiration for 130 crore Indians.

Indian Wing Commander Abhinandan was captured by Pakistan’s ground forces after his MiG-21 was shot down by Pakistan Air Force (PAF) on crossing the Line of Control (LoC) on Wednesday.

News agency ANI reported that Pakistan has changed the timing of handover twice. New Delhi wanted to bring back captured Indian Air Force (IAF) pilot Abhinandan Varthaman from Pakistan by a special flight but was denied permission. Pakistan has said Wing Commander Abhinandan Varthaman was being released as a “gesture of peace”. It is not clear whether the pilot will be handed over to the International Red Cross or to the Indian authorities by Pakistan.

Previous “I was trying to find the target when PAF Shot me down”: Indian pilot Wing Commander Abhinandan
Next Trevor Noah slammed for mocking Indian army and joking about possible Indo-Pak war