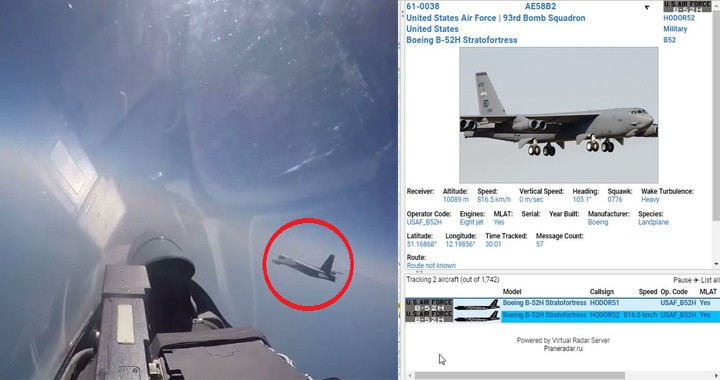 Russian fighters were scrambled twice to intercept American B-52H bombers, active on the eastern and southern borders. The close encounters between Russian and US planes occurred both above the Baltic and Black seas.

In one of the encounters, one of the bombers was flying directly toward the Crimean Peninsula, which the Kremlin occupies, in what could have been a mock strike run. Another one of the B-52s subsequently made an emergency landing at RAF Mildenhall in the United Kingdom following an unrelated in-flight emergency.

#Footage The #USAirForce's #B52H strategic bombers were detected yesterday near the Russian state border in the vicinity of the #BlackSea and the #BalticSea. In order to intercept the aircraft, Russian on-duty #Su27 fighter jets were scrambled https://t.co/9V4LcH4fmk @mfa_russia pic.twitter.com/pQF5TmYDQI

The Russian Ministry of Defense and the country’s National Defense Management Center both released statements about the intercepts on June 17, 2019. The same day, U.S. Air Force’s in Europe released its own statement confirming that B-52s from the 5th Bomber Wing at Minot Air Force Base in North Dakota had flown missions in support of three different exercises, but did not name them.

The annual NATO-led Baltic Operations (BALTOPS) exercise is presently ongoing in and around the Baltic Sea, while the U.S. Army and Romanian Land Forces are hosting the latest iteration of Saber Guardian in the Black Sea region, both of which have included B-52s in the past. Online flight tracking software showed that at least three bombers had deployed from the United States and then two continued back to base after conducting the marathon missions.

“The crews of Russian Su-27 fighter jets … have intercepted US Air Force B-52H strategic bombers, that approached Russian state border from the Black and Baltic seas,” the military said.

Using the callsigns Hodor 51, 52, and 53 – possibly a reference to a character from the immensely popular television show Game of Thrones, which recently concluded – flying in Europe throughout the day.

Interestingly, on their way back home, HODOR 51 and 52 split: the latter returned to Minot AFB whereas HODOR 51 was forced to perform an emergency landing at RAF Mildenhall, UK, because of fire reported on 2 of its 8 engines.

Separately, the U.K. Ministry of Defense released photographs of a B-52 flying in the Baltic, which appears to have been Hodor 53. The pilot or pilots onboard a Royal Air Force (RAF) Eurofighter Typhoon from 121 Expeditionary Air Wing, which is presently deployed to Estonia as part of the NATO Baltic Air Policing Mission, grabbed the shots of the bomber during “routine interoperability training,” according to an official Tweet.

? @usairforce B-52 bomber photographed by an RAF Typhoon of 121 Expeditionary Air Wing operating from Estonia.

The sortie was conducted earlier today in the #Baltic sea region as part of routine interoperability training with our US allies ??. pic.twitter.com/AvQIVJLZni