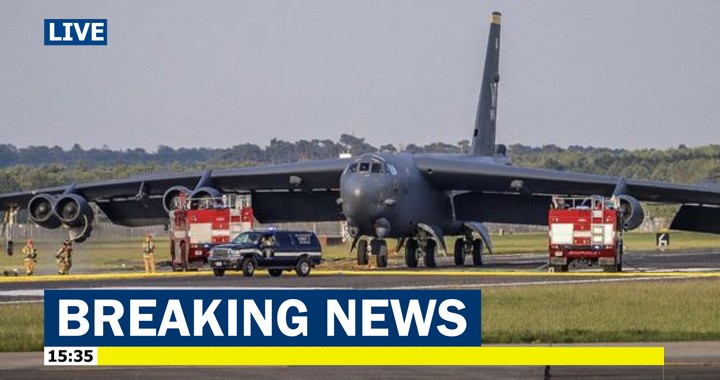 A Boeing B-52H Stratofortress, callsign HODOR51, suffered 2 engine inflight failures, then circled over East Anglia as it burnt off fuel before making a safe emergency landing at RAF Mildenhall.

No injuries were reported.

The American bomber could be seen circling over the RAF Mildenhall area before it touched down on the runway at about 19:00 BST on Monday.

Officials said they could not give details of the emergency as the aircraft was “supporting several exercises from a Stateside base”.

People in the area said the landing “caused a big stir”.

A RAF Mildenhall spokeswoman said the B-52 landed at the US Air Force base “after calling in an in-flight emergency”.

Laura Ellis, who lives near RAF Lakenheath and was with her son Jack, 10, said: “The B-52s don’t normally land here, they normally go to RAF Fairford in Gloucestershire so that’s why it caused a stir.

“It wasn’t until people knew it had a problem that it caused even more of a stir.

“Once you knew it had engine failure, you wanted it to get down OK and for everyone to be safe.”

The B52 has been used by the United States Air Force since 1955 and featured in the Cold War, Vietnam War and the Gulf War.