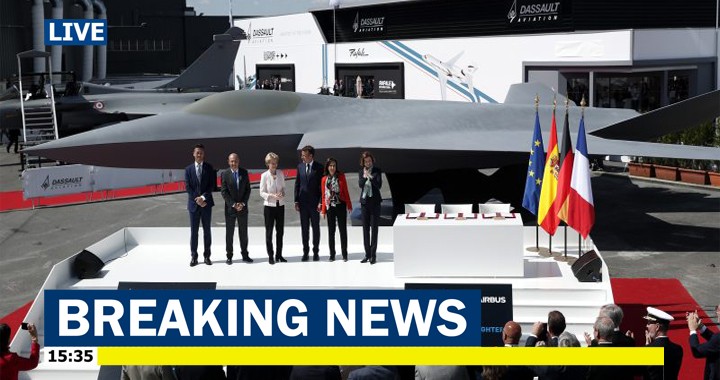 French President Emmanuel Macron and the defense ministers of Germany, France, and Spain unveiled the mockup of a sixth-generation combat aircraft

The Future Combat Air System, or FCAS, is Dassaut’s first clean sheet fighter design in four decades, following the 1980s-era Rafale. The aircraft, which is being designed in collaboration with European aircraft giant Airbus, will fly for the first time in 2026.

Dassault Aviation and Airbus SE have delivered a joint industrial proposal to the governments of France and Germany for the first Demonstrator Phase of the Future Combat Air System (FCAS). This next major milestone achievement in the programme was showcased by the reveal of the New Generation Fighter and Remote Carriers models to a world public on the opening day of the 2019 Paris Air Show.

The jet features an elevated bubble canopy, promising excellent visibility to the pilot. It also has two engines and F-35-style air intakes. FCAS appears to have a cranked kite wing formation similar to the X-47B unmanned aerial vehicle. The cranked kite design broadens the fuselage, increasing the interior volume of the aircraft and allowing more room for internally stored fuel and weapons. FCAS also looks like it has a single set of low-angle stabilizers replacing traditional, separate horizontal and vertical stabilizers, making the aircraft even more stealthy.

FCAS will almost certainly be a single-seat only jet, as fifth- and sixth-generation fighters are expensive enough without having to develop one and two seat versions. A mockup of the cockpit, posted on Twitter, appears to show a digital screen that takes up virtually the entire space in front of the pilot, providing ample view of things such as maps.

A possible taster of how a #SCAF #FCAS cockpit might look…expect lots more news from this project at #PAS2019 including options for so-called remote carriers and new weapons. pic.twitter.com/lXq6JYqRkF

The reveal of the models by Eric Trappier, Chairman and Chief Executive Officer (CEO) of Dassault Aviation and Dirk Hoke, CEO of Airbus Defence and Space was witnessed by the host of the opening ceremony at Le Bourget airport, President of the French Republic, Emmanuel Macron, and the French Minister of the Armed Forces, Florence Parly, the German Federal Minister of Defence, Ursula Von Der Leyen and the Spanish Minister of Defence, Margarita Robl

This Demonstrator Phase will cover the period between 2019 and mid-2021 and will serve as a starting point for demonstrators and technology development for a New Generation Fighter (NGF), Remote Carriers (RC) and an Air Combat Cloud (ACC) to fly by 2026. The various teaming agreements, which also include the companies MBDA Systems and Thales, contain a defined scope of planning of the first Demonstrator Phase, ways of working and commercial agreements. Additionally, transparent and fair handling of Intellectual Property Rights has been established in the respective teaming agreements. In parallel, Safran and MTU are in charge of developing a New Engine.

“The Joint Concept Study awarded to Dassault Aviation and Airbus in January 2019 was the first step in a fruitful cooperation between both companies. The first Demonstrator Phase marks another decisive step in the Next Generation Weapon System industrial organisation in which the New Generation Fighter, to be built by Dassault and Airbus, with Dassault Aviation as Prime contractor, as well as the Remote Carriers and Air Combat Cloud with Airbus as Prime contractor, will be the corner stone of the Future Combat Air System”, said Eric Trappier, Chairman and Chief Executive Officer of Dassault Aviation. “The progress we have achieved on the FCAS programme in recent months is remarkable. It will shape Europe’s most decisive military air combat programme for the decades to come and turn out a strong move in constructing Europe’s sovereignty.”

Dirk Hoke, Chief Executive Officer of Airbus Defence and Space, said: “I am very satisfied with the level of trust and partnership we have built with Dassault already in the execution of the Joint Concept Study, and now with the industrial proposal we’ve submitted to the both governments. The principles of our industrial cooperation include joint decision making, a clear governance set-up, transparent ways of working, and a common preparation and negotiation of this first phase of the demonstrator activities.”

After initiating the negotiation phase through the delivered proposal, Dassault Aviation and Airbus expect a contract award for the first Demonstrator Phase by Q4 2019.

Also added that at the 2019 Paris Air Show, the Governments of France and Germany officially welcomed Spain as a partner nation in the sixth-generation Future Combat Air System (FCAS) programme.

Alberto Gutierrez, Head of Military Aircraft at Airbus Defence and Space, said: “Starting FCAS on a bilateral basis between France and Germany was important to kick-start the programme and to get it on track. The integration of Spain now is a credible step forward towards the envisioned Europeanisation of FCAS. Not only is Spain one of Airbus’ founding countries but it’s also an industrial stronghold for military aircraft in our company. The country is a key contributor to Europe’s defence capabilities as well as an experienced and trusted partner in joint defence programmes. So we’re not only glad to see Spain join FCAS, we also believe it is a natural evolution for the programme.”

Previous Video Features Rare Facts About The SR-71 Blackbird That Will Surprise You
Next U.S. Air Force B-52 bomber makes emergency landing at RAF Mildenhall after engines failure