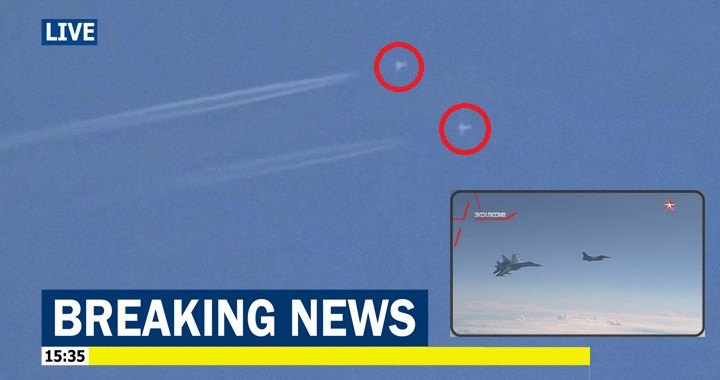 The Turkish Air Force allegedly deployed some of their warplanes to the southern countryside of the Idlib Governorate after the Syrian Arab Army (SAA) scored a series of gains near the city of Khan Sheikhoun.

According to the aviation publication Avia.Pro, two Russian Su-35 jets intercepted the Turkish warplanes and forced them to leave Syria’s airspace.

The Turkish Air Force fighter jets were alerted and sent to the southern part of the Syrian province of Idlib after the Syrian Air Force struck a Turkish military convoy moving to rescue terrorists controlling the town of Khan Shaykhun.

However, according to reports, two Russian Su-35 fighter jets were scrambled from the Khmeimim air base to intercept them. The Russian pilots were able to drive Turkish combat aircraft out of the Syrian space in just a few minutes.

There are no other details that have been released. But reportedly, the Turkish fighter jets were forced to leave Syrian airspace after only 30-40 kilometers, which indicates that they either were warned in advance, or just simply saw the Russian aircraft on their radars.

Later on, a pair of Russian Su-35 fighters was spotted directly in the vicinity of the city of Khan Shaykhun.

While these claims are not confirmed, the Turkish military did send two large convoys to the northern outskirts of Khan Sheikhoun after their allied militant forces lost a great deal of ground to the Syrian Arab Army around the city.

This avoided incident took place shortly after the Syrian Arab Army struck the Turkish convoy in greater Idlib. Turkey claimed that 3 civilians were killed and 12 were injured. Ankara further said that the convoy was bringing vital humanitarian supplies to Observation Point No. 9 and in order to keep supply routes open and prevent civilian casualties in the region.

The mentioned ‘humanitarian supplies’ included about 28 military vehicles, including at least 7 battle tanks, and was moving towards the moderate rebels (al-Qaeda-linked militants) who have been suffering against the Syrian Arab Army in recent days and weeks.

As of August 19th, the Syrian Arab Army and other pro-government forces have started storming Khan Shaykhun and cut off the M5 highway, usually used by Turkey to provide “humanitarian help” to the militants in the city.

It is worth noting that both the Syrian and Turkish air defenses have downed each others warplanes during the Syrian conflict, with the latest incident in 2017.