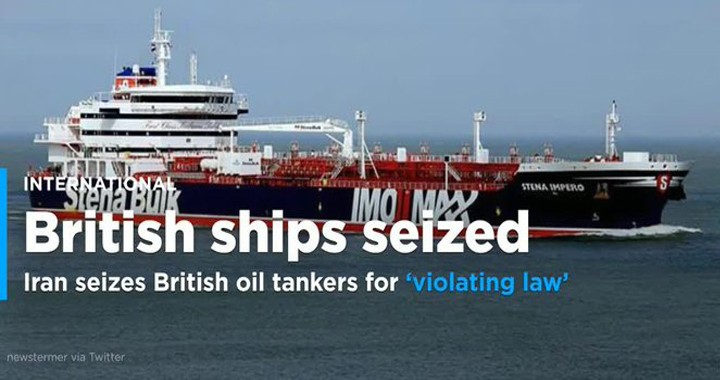 Reports then emerged that a second ship, the British-owned tanker Mesdar, had also been taken by force. A maritime tracker showed the Saudi Arabia-bound Mesdar sharply veer off course toward Iran.

The Stena Impero’s owner, the Sweden-based Stena, and its operator, Northern Marine Management, released a statement about the confirmed seizure.

“Stena Bulk and Northern Marine Management can confirm that at approximately 1600 BST on 19 th July UK registered vessel Stena Impero (built 2018, 49,683 DWT) was approached by unidentified small crafts and a helicopter during transit of the Strait of Hormuz while the vessel was in international waters,” the release said. “We are presently unable to contact the vessel which is now heading north towards Iran.”

#BREAKING – #Iranian navy seizes 2 #British Oil Tankers after crossing into #Iran's territorial waters. 1 has currently been released. This comes after the #UK seized an Iranian oil tanker on route to #Syria. pic.twitter.com/pHzvHiDxYp

The company said there were 23 crew members aboard the Stena Impero. None of the sailors aboard either ship are British citizens, UK Foreign Secretary Jeremy Hunt said in a statement.

“There have been no reported injuries and the safety and welfare of our crew remains our primary focus,” Hanell said. “We are in close contact with both the UK and Swedish government authorities to resolve this situation and we are liaising closely with our seafarers’ families.”

The company also said its ship was in “full compliance with all navigation and international regulations,” in contrast to why Iran said it had detained the vessel.

Iranian officials “see this as a tit-for-tat situation, following Grace1 being detained in Gibraltar. Nothing could be further from the truth,” Hunt said later Saturday.

Here’s what we know:

We see no more evidence of Iran thwarting maritime traffic.

LR2 #Poseidon was moving toward Iranian waters, though we see nothing strange about the voyage.

This followed concerns about VLCC #Mesdar and LR 1 Stena Impero, which both have ties to the UK. pic.twitter.com/kveiEiLrTr

The view from Iran was different.

In comments on Twitter on Saturday, Iran’s Foreign Minister Mohammad Javad Zarif characterized the seizure of Iran’s tanker July 4 as “piracy.” Politician and former Guard commander, Maj. Gen. Mohsen Rezai, wrote that Iran was not seeking conflict, “but we are not going to come up short in reciprocating.”

The spokesman for Iran’s Guardian Council, Abbas Ali Kadkhodaei, was also quoted in the semi-official Fars news agency describing Friday’s seizure as a legal “reciprocal action.” The council rarely comments on state matters, but when it does it is seen as a reflection of the supreme leader Ayatollah Ali Khamenei’s views. The council works closely with Khamenei, who has final say on all state matters.

The tit-for-tat move by Iran drew condemnation from European signatories to Iran’s nuclear accord with world powers. Germany and France both called on Iran to immediately release the ship and its crew, with Berlin saying the seizure undermines all efforts to find a way out of the current crisis.

The US-Iran standoff has targeted tankers in the Strait of Hormuz, through which over $1 billion of crude oil is shipped daily. Oil prices have remained largely stable over the past month and are about $55 for a barrel, but they began rising as news spread of Iran’s seizure.

Commenting on broader tensions in the region, US President Donald Trump said on Friday that US ships are “the most deadly ships ever conceived, and we hope for [Iran’s] sake they don’t do anything foolish. If they do they’re going to pay a price like nobody’s ever paid a price.”