Ralf Vandebergh, who regularly takes close-up pictures of spacecraft in the Earth’s orbit, said he observed the elusive X-37B on one of its missions.

He said he first saw the space plane in May and then tried to capture it in mid-June, but the X-37B appeared to have escaped his sight after changing its orbit.

The #OTV5 / #X37B space plane photographed in orbit! Finally an image showing this mini-Space Shuttle which is only a fraction in size of the real Space Shuttle. Nevertheless, the images succeeded beyond expectations and show even a sign of the nose/payload bay/tail or even more. pic.twitter.com/Uy7qBCnoif

“Thanks to the amateur satellite observers-network, it was rapidly found in orbit again and I was able to take some images on June 30 and July 2,” the skywatcher wrote, saying that on the most recent occasion, the spacecraft was almost overhead.

Even more remarkably, according to Vandebergh’s photo analysis, he may have actually captured the X-37B with its cargo bay door open, performing some type of experiment or operation.

Vandebergh told reporters, “It is really a small object, even at only 300 kilometers [186 miles] altitude, so don’t expect the detail level of ground-based images of the real space shuttle. We can recognize a bit of the nose, payload bay and tail of this mini-shuttle, with even a sign of some smaller detail.”

Vandebergh used a 10-inch F/4,8 aperture Newtonian telescope fitted with an Astrolumina ALccd 5L-11 mono CMOS camera to capture his photos. He tracked his elusive quarry across the sky by hand using a small 6×30 spotting scope to line up his telescope for the photos.

The X-37B – otherwise known as the Orbital Test Vehicle (OTV) – looks like a mini-space shuttle, so the image did not show it in great detail. “Nevertheless, the images succeeded beyond expectations and show even a sign of the nose/payload bay/tail or even more,” Vandebergh said.

“Considering this, the attached images succeeded beyond expectations. We can recognise a bit of the nose, Payload Bay and tail of this mini-shuttle with even a sign of some smaller detail.”

The space plane has been circling the Earth in obscurity for over 20 months on what became the fifth flight of the programme – and its longest mission so far. 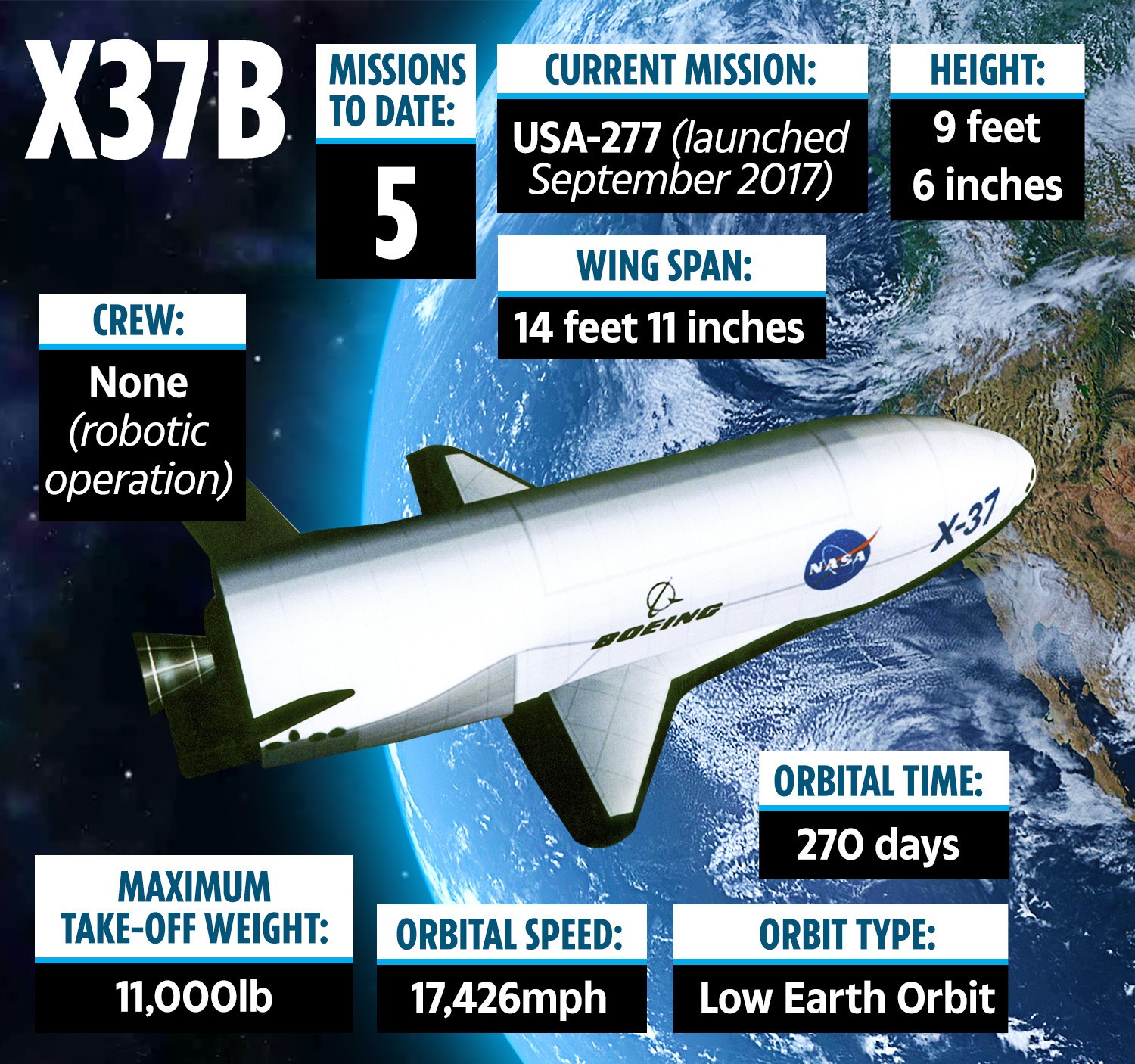 When the OTV-5 took off in September 2017 atop a SpaceX Falcon 9 rocket, the only payload that the US Air Force revealed was the Advanced Structurally Embedded Thermal Spreader, developed by the US Air Force Research Laboratory to test experimental electronics and oscillating heat pipes.

But the mission, which is overseen by the 3rd Space Experimentation Squadron at the Schriever Air Force Base, has sparked suspicion among some critics that the spacecraft’s payload could be involved in intelligence-gathering.

It was detected in orbit for the first time only in 2018, and its planned flight duration is still unknown. Space enthusiasts have speculated that the sixth flight, X-37B OTV-6, could lift off in 2019 again on an Atlas V rocket.