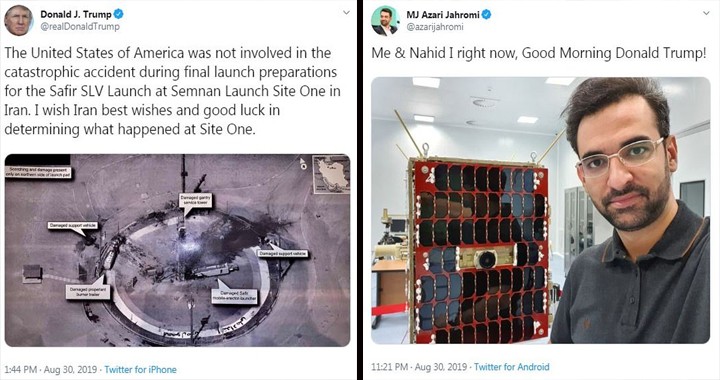 An Iranian official has tweeted at President Donald Trump over an apparent rocket failure, showing an image of him standing next to a satellite that was supposed to be launched.

Iran’s Information and Communications Technology Minister Mohammad Javad Azari Jahromi tweeted the image Saturday of himself with the Nahid-1 satellite.

“But what we do know is that the Nahid satellite is still being prepared at the Iranian Space Research Institute,” he added.

Trump’s tweet on Friday which trolled Iran’s failure-prone space program just after its Safir-1B rocket said to be transporting an Iranian-made satellite into orbit exploded on its launch pad was viewed by many as a tacit admission the US had something to do with it, either through a cyber-hack or other act of sabotage.

The United States of America was not involved in the catastrophic accident during final launch preparations for the Safir SLV Launch at Semnan Launch Site One in Iran. I wish Iran best wishes and good luck in determining what happened at Site One. pic.twitter.com/z0iDj2L0Y3

The US president uploaded a picture of what many speculate was from a classified intelligence brief, given its high resolution and angle — highly unusual in terms of most known satellite capabilities — suggesting the close-up image could have been from a secret American drone in the area, or a cutting edge spy satellite.

Prior satellite images showed the aftermath of the explosion at the Imam Khomeini Space Center in Iran’s Semnan province, southeast of Iran’s capital, as the rocket and satellite were scheduled to launch, which constituted the Islamic Republic’s third failed launch this year.

Trump’s administration has ratcheted up economic pressure on Iran this year with sanctions to try to force it to renegotiate a 2015 pact with world powers limiting its nuclear program. Trump withdrew the United States from the pact in May last year.

Trump has offered to hold talks with Iran but Tehran says it must first get relief from US sanctions.

Previous The Man Who Sued Pepsi For Not Giving Him A Harrier Fighter Jet
Next Su-27 Mirgorod Pyramid: watch ukrainian flanker collided with two other Su-27s parked at Mirgorod Air Base 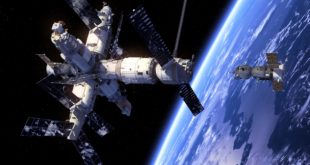