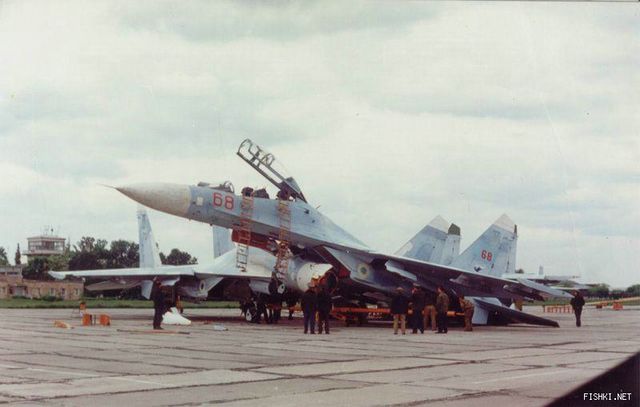 As told by Yefim Gordon and Dmitriy Komissarov in their book Sukhoi Su-27 & 30/33/34/35, both trainers were eventually repaired, but the single-seater was written off and became a museum exhibit.

Related Article: Two SU-27 smashed each other during their on-ground movement

The Sukhoi Su-27 is a Soviet-origin twin-engine supermaneuverable fighter aircraft designed by Sukhoi. It was intended as a direct competitor for the large United States fourth-generation fighters such as the Grumman F-14 Tomcat and F-15 Eagle, with 3,530-kilometre (1,910 nmi) range, heavy aircraft ordnance, sophisticated avionics and high maneuverability.

The Su-27 was designed for air superiority missions, and subsequent variants are able to perform almost all aerial warfare operations. It was designed with the Mikoyan MiG-29 as its complement.

The Su-27 entered service with the Soviet Air Forces in 1985. The primary role was long range air defence against American SAC B-1B and B-52G/H bombers, protecting the Soviet coast from aircraft carriers and flying long range fighter escort for Soviet heavy bombers such as the Tu-95 “Bear”, Tu-22M “Backfire” and Tu-160 “Blackjack”.

Previous Iran IT minister taunts Trump by showing off undamaged satellite linked to the explosion at a rocket test site
Next Taliban Claims To Shot Down U.S. MQ-1 Predator Drone in Afghanistan