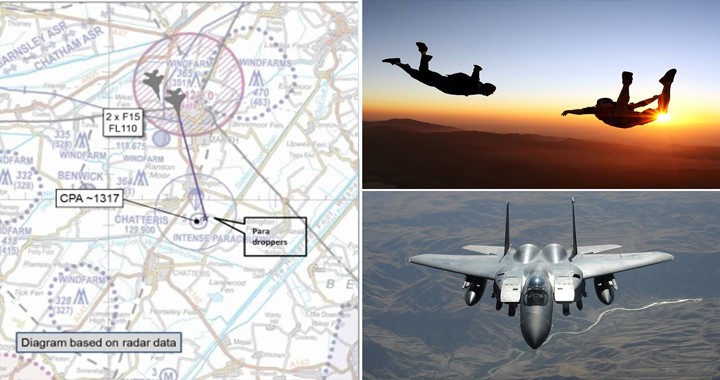 Two skydivers nearly collided in mid-air with a pair of fighter jets travelling at almost 350mph over the UK, a report has revealed.

The parachutists were free-falling at speeds of 120mph over Chatteris airfield in Cambridge when the US warplanes passed underneath them.

The two freefallers could have been killed instantly had they hit the F15 fighter jets as they tumbled through the air over the Cambridge town of Chatteris on April 17.

Details of the incident in April have been revealed in a report by the UK Airprox Board, which classified it in the second-highest danger category.

The air safety assessors said they had seen footage recorded on the helmet camera of one of the skydivers and could “clearly see” the F15 jets passing beneath.

The report said: “Once the parachutists had seen the F15s there was very little they could do to avoid the situation, having no control over their speed or direction whilst in free-fall.”

The report said it was “unfortunate” that the pilots from RAF Lakenheath in Suffolk had not received any warnings from air traffic control that the parachute site was active.

This was because the jets had been handed over from air traffic controllers at RAF Coningsby in Lincolnshire to those at RAF Lakenheath “at a busy time”, according to the report.

The fighter jets were flying at 350mph – well below their top speed of 1,600mph.

But the US pilots, based at RAF Lakenheath, should have been told Skydive Chatteris had parachutists out that day, the report said.

It has led to the US Air Force base at Lakenheath re-briefing its fighter crews to ‘make them aware’.

The pilots ‘should have known about the position and activities at Chatteris as part of their normal briefing routine’ and either questioned air traffic control or avoided the airfield.

Chatteris, where several parachute clubs are based, call nearby air traffic controllers every morning to tell them if they are active.