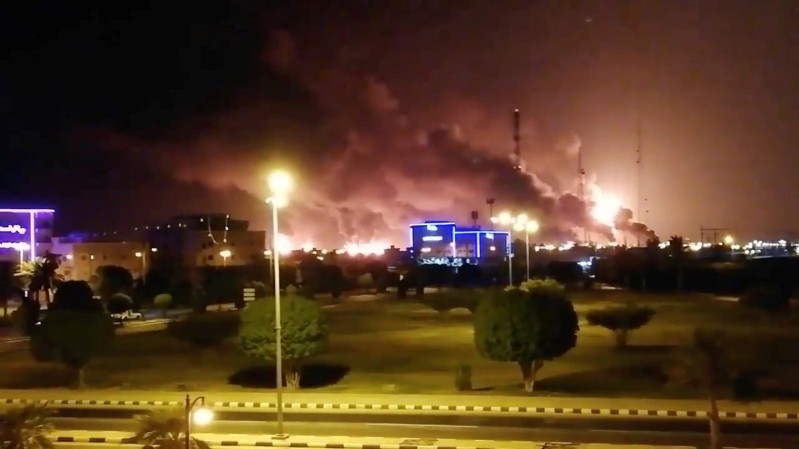 In a large-scale operation, ten suicide unmanned aerial vehicles (UAVs) of the Houthis attacked early on September 14 two strategic oil facilities in the eastern Saudi areas of Buqayq and Khurais.

In an official statement, a spokesman for the Yemeni group said that the attack, dubbed Operation Deterrent Balance 2, was a response to the Saudi-led coalition siege and airstrikes on Yemen.

“Operation Deterrent Balance 2 came after a careful intelligence operation and prior monitoring and cooperation from honorable and free people within Saudi Arabia,” Brig. Gen. Yahya Sari said in the statement, warning that “future operations will expand further and be more painful.”

Buqayq and Khurais facilities, both run by Saudi Aramco, are located more than 1,100km away from Houthi-held areas in northwestern Yemen. The Yemeni group likely used its long-range Samad-3 UAVs in the attack.

The fires are now under control at both facilities, state media said.

A spokesman for the Iran-aligned Houthi group in Yemen said it had deployed 10 drones in the attacks.

The military spokesman, Yahya Sarea, told al-Masirah TV, which is owned by the Houthi movement and is based in Beirut, that further attacks could be expected in the future.

There have been no details on the damage but Agence France-Presse quoted interior ministry spokesman Mansour al-Turki as saying there were no casualties.

Abqaiq is about 60km (37 miles) south-west of Dhahran in Saudi Arabia’s Eastern Province, while Khurais, some 200km further south-west, has the country’s second largest oilfield.

Saudi security forces foiled an attempt by al-Qaeda to attack the Abqaiq facility with suicide bombers in 2006.

eration with the honourable people inside the kingdom”.

Saudi Arabia is said to be shutting down around half of its oil output, the Wall Street Journal reports.

Officials have not yet commented on who they think is behind the attacks.

“At 04:00 (01:00 GMT), the industrial security teams of Aramco started dealing with fires at two of its facilities in Abqaiq and Khurais as a result of… drones,” the official Saudi Press Agency reported.

“The two fires have been controlled.”