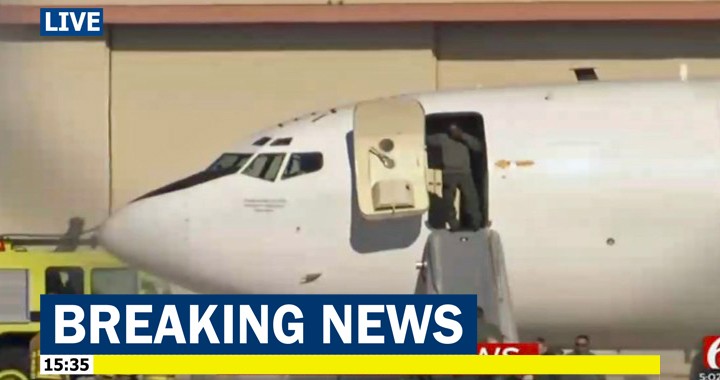 A U.S. Navy E-6B Mercury made an emergency landing in Tulsa Tuesday afternoon after reports of a fire on board.

The plane landed at Tulsa International Airport around 3 p.m. and was immediately met by emergency crews.

The crew were seen to evacuate the aircraft using the emergency slides. At least one crew member appeared to be covering his face, possibly reacting to smoke in the aircraft.

The flight crew deployed the plane’s emergency chutes to get off the aircraft. No injuries were reported.

The E-6 is a converted Boeing 707. The E-6s are flown by the Navy’s Strategic Communications Wing One at Tinker Air Force Base. They’re based at Tinker because that allows them easy access to both coasts.

Each aircraft carries two long antennas which allow U.S. military leaders to communicate with the Navy’s fleet of ballistic missile submarines while the submarines are submerged.

The incident is noteworthy because of the E-6B Mercury’s role in the strategic defense. The aircraft is operated by Strategic Communications Wing One (STRATCOMWING ONE).

It is unknown if the aircraft involved in the emergency landing was from VQ-3 or VQ-4, flying an active mission as part of the ongoing strategic nuclear deterrent force or if this aircraft was attached to VQ-7, the training unit that supplies the two operational units.

Notable features of this E-6B Mercury include a five-mile-long wire antenna that is trailed at a near vertical angle behind the plane in flight to communicate with submerged nuclear powered fleet ballistic missile submarines.

No further information about the emergency landing incident has been reported.