The US Government and Lockheed Martin have officially proposed the sale of the F-35 aircraft to Switzerland to replace its ageing fighter jets through the New Fighter Aircraft (NFA) competition.

The move comes a day after Airbus and Germany placed their bid offering Eurofighter aircraft to the Swiss Government.

The F-35 proposal is a total package offering that includes up to 40 F-35A aircraft, a sustainment solution tailored to Swiss autonomy requirements, and a comprehensive training program.

The offering includes an industrial package providing Swiss industry substantial F-35 work opportunities. Should the F-35 be selected as the new fighter for Switzerland, this industrial work would take place in all Swiss regions.

Swiss industry has the opportunity to compete for direct production of components for use on all F-35s produced, sustainment projects focused on supporting the Swiss Air Force and enhancing Swiss autonomy, and cybersecurity projects directly related to the F-35.

Lockheed Martin is also offering an option for the assembly of four aircraft in Switzerland to ensure the Swiss Air Force and Swiss industry gain an understanding of how to maintain the F-35 airframe and its advanced capabilities for the life of the program.

“We are confident that our F-35 offer is the best and most affordable solution for the Swiss NFA competition,” said Greg Ulmer, F-35 Program vice president and general manager. “We are offering the only 5th generation fighter at the cost of 4th generation aircraft while offering Switzerland an aircraft that will protect Swiss sovereignty for decades to come.”

To date, the F-35 has been selected by 13 nations and operates from 26 bases worldwide, with nine nations operating F-35s on their home soil. There are more than 585 F-35s in service today, with more than 1,190 pilots and 9,750 maintainers trained on the aircraft.

In 2018, Switzerland launched the multibillion NFA competition to replace its ageing fleet of F-5 fighter jets.

The assessments of the bids are expected to be completed by the end of this year.

Previous U.S. Navy Destroyer Has Shot Down An Incoming Intercontinental Ballistic Missile For The First Time
Next Watch: Details About The Big Business Of Fighter Jets 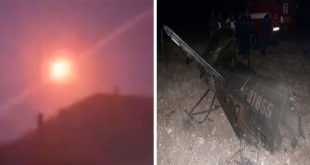