The test took place at 7:50 p.m. Hawaii Standard Time on November 16. The USS John Finn was positioned off Hawaii for the missile interception test. The test ICBM was launched from the Kwajalein Atoll in the western Pacific. The interception took place outside of earth’s atmosphere where incoming ICBM attacks begin their reentry prior to their terminal attack phase.

The missile launched from the USS John Finn was a Raytheon/Mitsubishi SM-3 Block IIA. Tuesday’s test interception was part of a mission called Flight Test Aegis Weapons System-44 (FTM-44), a developmental test required by the U.S. Congress to determine the possible effectiveness of the Raytheon/Mitsubishi Heavy Industries project SM-3 Block IIA missile in an operational setting. The original version of the SM-3 missile was intended to intercept only shorter-range intermediate-range ballistic missiles or IRBMs.

In a statement, the head of the MDA said it was a big accomplishment for the agency and showed how a potential defense of Hawaii scheme could work in conjunction with ground-based interceptors now based in Alaska.

“This was an incredible accomplishment and critical milestone for the Aegis BMD SM-3 Block IIA program,” said Vice Adm. Jon Hill. “The Department is investigating the possibility of augmenting the Ground-based Midcourse Defense system by fielding additional sensors and weapon systems to hedge against unexpected developments in the missile threat.

“We have demonstrated that an Aegis BMD-equipped vessel equipped with the SM-3 Block IIA missile can defeat an ICBM-class target, which is a step in the process of determining its feasibility as part of an architecture for layered defense of the homeland.”

This was the sixth test of the SM-3IIA from a Navy ballistic missile defense-capable ship, and the first time the Navy has shot down an ICBM. The test was to fulfill a congressional requirement to test the SM-3IIA against ICBMs before the end of the year. It was originally slated for May but was delayed because of the Covid-19 pandemic.

The successful test marks another positive step for SM-3 after a run of bad luck in recent years, including an incident where a sailor inadvertently triggered a self-destruct of the missile in flight by misidentifying the incoming missile as a friendly target. A test in 2018 also failed.

Raytheon, which developed the SM-3IIA, was thrilled by the successful test. 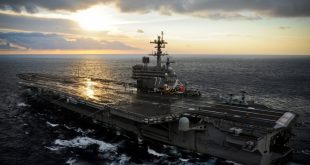 An MV-22 Osprey maneuvers on the flight deck of the aircraft carrier USS George H.W. …