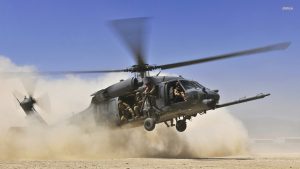 According to US Defence Department a Sikorsky HH-60 Pave Hawk helicopter is crashed near the town of al-Qaim, Anbar province, near the Syrian border that resulted in death of 7 american military personal

According to  Brig. Gen. Jonathan P. Braga, the director of operations of Operation Inherent Resolve

“This tragedy reminds us of the risks our men and women face every day in service of our nations. We are thinking of the loved ones of these service members today.”

An investigation into the cause of the crash is ongoing, but initial reports indicate the airmen were not on a combat mission and no hostile fire was taken, according to US Defense Department officials. Braga confirmed that the crash did not appear to be caused by enemy fire.

Right now more than 5,000 American soldiers are on duty in Iraq as part of the fight against the Islamic State group.

The Sikorsky MH-60G/HH-60G Pave Hawk is a twin-turboshaft . It is a derivative of the UH-60 Black Hawk and incorporates the US Air Force PAVE electronic systems program. The helicopter is in service since 1982