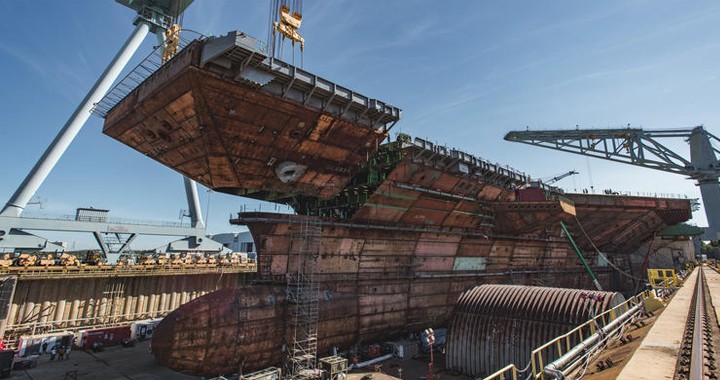 The USS John F Kennedy is the second Gerald R Ford-Class aircraft carrier currently under construction for the US Navy and is due to be commissioned in 2020.

A recent milestone was achieved when the final super-lift was carried out, completing the primary hull and flight deck.

The upper bow section, a giant piece of the puzzle, was recently lifted into place, according to a company news release. It weighs 780 tons and took 18 months to build.

Mike Butler, program director on Kennedy, said the company is looking forward to christening the ship this fall, ahead of schedule.

“The upper bow is the last super-lift that completes the primary hull,” he said.

The ship is being built using new digital tools, and Kennedy is on track to be completed at a lower labor cost than its predecessor, the first-in-class USS Gerald R. Ford.

More than 3,200 shipbuilders and 2,000 suppliers from across the country are contributing to the construction of Kennedy.

The Newport News shipyard, a division of Huntington Ingalls Industries, is the sole designer and manufacturer of nuclear-powered aircraft carriers for the Navy.

The USS John F Kennedy will be powered by two nuclear reactors and propelled by four shafts which will be able to push the hundred-thousand tonne ship at speeds of up to thirty-five miles per hour. It is expected to have an unlimited range and will be in service for at least twenty-five years.

#CVN79 grew 70 feet in length with the addition of the lower stern. The 2nd Ford-class aircraft carrier is now 50% structurally complete. pic.twitter.com/O6EhV6UiIK

The flight deck is full of new innovations designed to make re-fuelling faster and more efficient. The command island has been moved aft to release additional space for flight deck operations and the ‘bomb farm’ has been removed. Ordnance will be stored and issued from two complexes, fore and aft, from a level below the flight deck.

All of the associated improvements to the flight deck are expected to increase the sortie rate while reducing the manpower required to service the aircraft.

The top sortie rate is expected to be in the region of 160 flights per day for thirty days, with a surge capacity of up to 270 in one day.

The new ship’s specifications are designed to make the human environment more ‘liveable’ with smaller berthing arrangements for just forty, rather than the 180 catered for in the older Nimitz class carriers.

This is in order to reduce foot traffic through common areas. Each berthing area will have its own wash-room facilities too.

Wider passageways are expected to improve flow of personnel during drills and allow movement of sailors through areas where colleagues may be readying for action.

Armament includes two 32-cell RIM-162 Evolved Sea Sparrow Missile launchers and two RIM-116 Rolling Airframe Missile launchers, but the main firepower will come from the eighty aircraft on board. In a war situation, the ship can accommodate up to ninety combat aircraft.

During construction, the ship is put together in dry-dock using one-hundred and sixty-two super-lifts, with the largest weighing nine-hundred tonnes. The iconic command island weighs an incredible five-hundred and fifty tonnes alone and is super-lifted into position draped in the stars and stripes.

The command island was put in place during a ceremony that saw the placement of Kennedy dollars, challenge coins and the flight wings of Captain Todd Marzano, below the steel superstructure, entombing them within the body of the ship.

Captain Marzano is expected to be the USS John F Kennedy’s first commanding officer when it is delivered to the Navy as an operational warship in 2022.

Huntington Ingalls Industries, who are the sole designers and builders of nuclear powered aircraft carriers for the US Navy, have said in a statement that, despite additional demands on the construction budget, the final cost is expected to come in at least fifteen per cent lower than previous builds.

Previous Russian Ural Airlines plane with 234 people on board Crash-Lands in Cornfield
Next U.S. Navy Needs $5 Billion To Repair Damaged China Lake Base After Earthquakes