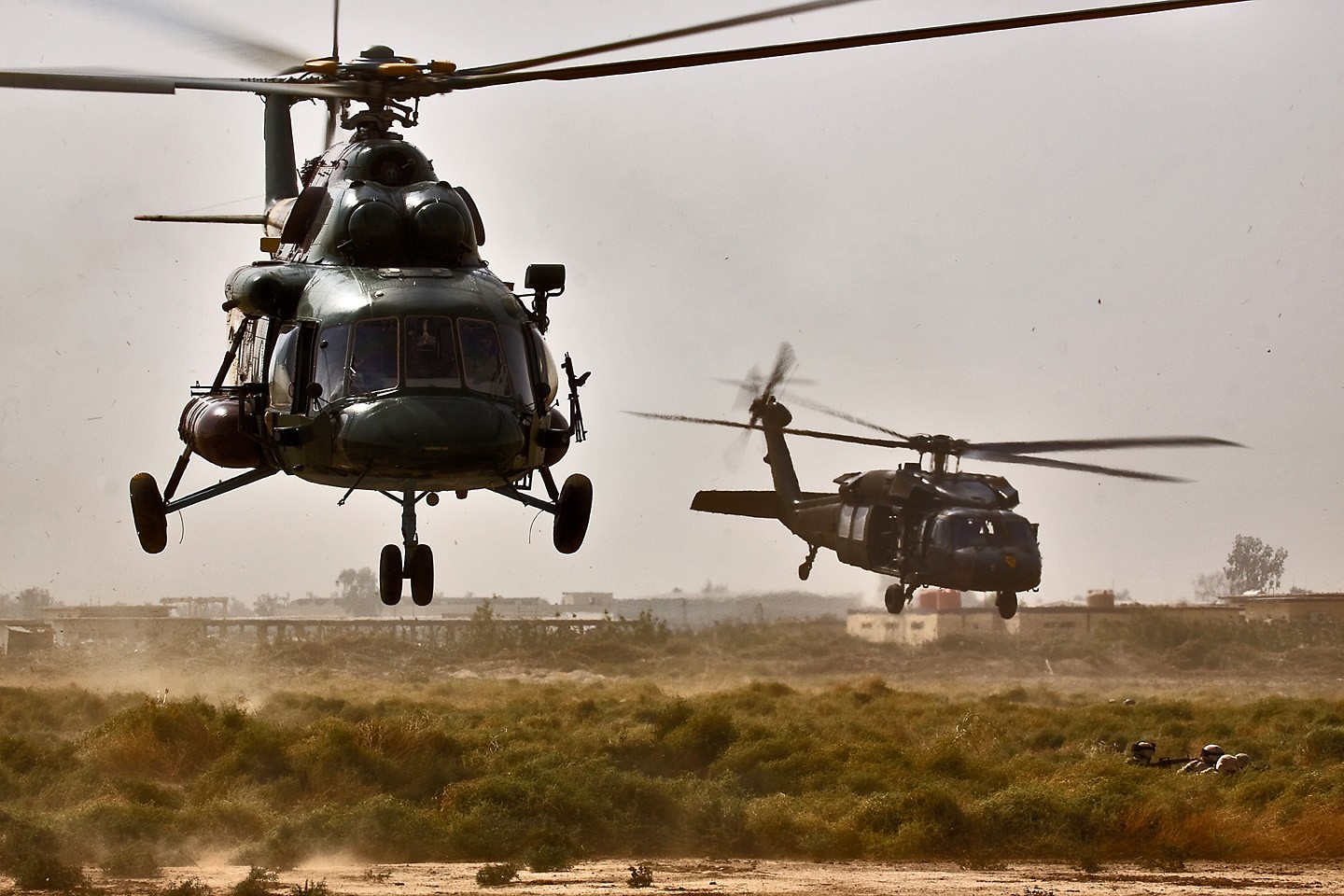 Russian Helicopters demonstrated yet another version of the long-serving Mi-8/17 family, the Mi-171E2, which has been flying since February. It is powered by Russian-made Klimov VK-2500 turboshafts instead of Ukrainian-built Motor-Sich TV3-117s. But the company’s plan to replace Ukrainian engines on new-production Mi-26 heavy-lift helicopters has been delayed a bit.

Ukraine has banned the export of engines for helicopters destined for Russian military or government operators. But it does allow Motor-Sich engines to be installed in Russian helicopters that are exported.

The new Mi-171E2 has a military-grade glass cockpit, which is armour-plated, and provision for weapons. It has fully composite blades of improved aerodynamic form with scimitar-shaped tips and an X-like anti-torque tail rotor. The VK-2500PS-03 engines—which were first fitted on the civilian Mi-171A2 version that has just entered service—have Fadec controls.

The new propulsion system gives the Mi-171E2 extended capability in high ambient temperatures, said Andrei Boginsky, general manager at Russian Helicopters. “Taking account of this, I am confident that the new machine will find numerous applications in hot and high conditions,” he said. The company said that both India and Kazakhstan had placed orders.

Russian Helicopters also discussed developments with the Mi-26, which re-entered production in 2011. Since then, the Russian Ministry of Defence (MoD) has received two dozen examples, powered by Ukrainian D-136 turboshafts that were available from Russian MoD stockpiles. But none of these have been the Mi-26T2 version with a glass cockpit and improved D-136-2 engines with FADEC controls capable of operating at temperatures up to 40 degrees C. This version has been exported to Algeria and Jordan, which have ordered 14 and four, respectively. So far, Algeria has received six in 2015-16 and Jordan one this year, which it displayed at the recent SOFEX event.

Now Russian Helicopters has started final assembly of a Mi-26T2V version for the Russian military. It has an advanced self-protection system and special provision for operation in very cold conditions. It is expected to fly by the end of the summer and enter service at the end of the year.

In the future, the Mi-26T2V will be powered by Russian turboshafts that are being developed by the United Engine Corporation and designated PD-14. But Boginsky said that flight tests of a refurbished Mi-26T or a freshly assembled Mi-26T2V with the new powerplants will not begin until 2022-23.

WHAT PENTAGON INSPECTOR GENERAL SAYS ABOUT Mi-17 AND MH-60

As reported by Bloomberg, Fine wrote in his latest quarterly assessment of U.S. expenditures in Afghanistan, posted in May (the same month the first Black Hawk was flown in an Afghanistan operation by the nascent air force) that the transition to Black Hawks “presents several challenges that have yet to be fully addressed.”

Noteworthy Fine said that the Black Hawk lacked the lift capability of the Mi-17 and “in general it takes almost two Black Hawks to carry the load of a single Mi-17.”

The American-made helicopter also lack the capacity to “accommodate some of the larger cargo items the Mi-17 can carry” and that “unlike the Mi-17, Black Hawks cannot fly at high elevations and, as such, cannot operate in remote regions of Afghanistan where Mi-17s operate.”

However Army Lieutenant Colonel Kone Faulkner, a Pentagon spokesman, defended the program to buy Black Hawks, saying that “in many cases the UH-60 is as, or more, capable than the Mi-17” and that “provides more firepower than the Mi-17 variant, which is limited to rockets only and is less maneuverable.”

He added that the UH-60’s maintenance costs are “significantly lower” than the Mi-17. Eventually the changeover will “enable a shift from a Russian supply chain to a well-established and reliable U.S. supply chain,” Faulkner concluded