The Republic Thunderjet is a first-generation jet fighter whose origins date back to 1944. Although the XP-84 didn’t fly until February 1946 the type received its baptism of fire just a few years later during the Korean War. The F-84G is the definitive version of the straight-winged version of the F-84. The particular F-84G on offer presently is one of the first few dozen examples accepted into Yugoslavian service, delivered directly from U.S. Air Force Europe stocks during the summer of 1953.

The aircraft is listed as being complete, and that it comes with an unrestored Allison J-35 engine. The description also states that this is “A rare opportunity to obtain a historical and classic F-84G Thunderjet for a fraction of its restored value. Simple, cable-controlled and with basic systems, this aircraft will be a basic restoration without the need for any costly rebuilding. Just rebuild systems and reassemble. Exclusive opportunities and airshows certainly await! The F-84G has an installed engine without logbooks. Numerous spare and new parts collected over 10 years. The sale price of the aircraft and the estimated restoration is favorable and not requiring significant labor costs.”

The Grumman F9F Panther is a remarkably charismatic, first-generation, naval jet fighter which saw extensive service during the Korean War. While a few of them have flown on the air show circuit over the years, none have flown actively since the late 1990s. It’s about time for that to change, and that opportunity is now available with the two Panthers on offer here; one being an F9F-4, and the other a -5 variant.

As Platinum Fighter Sales describes, this is an, “opportunity to obtain rare historical and classic jets for a fraction of their restored value. Simple cable controlled and with basic systems, these aircraft will be straightforward restoration projects without the need for any costly rebuilding. Just rebuild systems and reassemble.”

Platinum lists the details for the two Panthers as:

The current owner has acquired many spare and NOS Grumman Panther parts for use in the restoration of these two aircraft.

Currently no Panthers are flying or under restoration to fly. Exclusive opportunities and airshows certainly await.

Historic for their active and primary front line role in the Korean War, these jets were America’s first jets with punch. The F9F-5 “Panther” was the first first jet type to be used with the USN Blue Angels. Notable pilots making their mark in history flew these fighter types. America’s first man in space, John Glenn, the first man on the Moon, Neil Armstrong, Baseball great Ted Williams and others. The sale price of the aircraft and the estimated restoration for each aircraft is favorable and not requiring significant labor costs.

Asking $129,000 for the F-84 or will package with the F9F Panthers projects for 239K or near offer. Trades considered, for more information visit PlatinumFighters.com

Previous Group Captain (R) Saiful Azam: The Flying Ace Who Has Been Awarded Gallantry Awards For Valor In Air Combat By 3 Different Countries 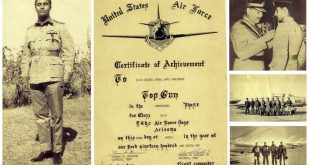 Group Captain (R) Saiful Azam: The Flying Ace Who Has Been Awarded Gallantry Awards For Valor In Air Combat By 3 Different Countries