A US Air Force F-15C Eagle, callsign “Chosen 4”, part of a 4 ship formation, crashed into the North Sea. Search and rescue operations were conducted. The HM Coastguard helicopter from Humberside has been sent along with Bridlington and Scarborough RNLI lifeboats.

The wreckage of the aircraft, and the deceased pilot, were found late afternoon.

At approximately 09.40LT, an F-15C belonging to the 493rd Fighter Squadron of the 48th Fighter Wing, based at RAF Lakenheath, UK, callsign “CHOSEN 4”, crashed into the North Sea.

The aircraft was part of 4-ship (c/s “CHOSEN 1-4”). Emergency comms were heard on 282.8 a known koint/combined on-the-scene voice and DF SAR frequency used throughout NATO.

A massive SAR (Search And Rescue) operation was launched: along with three KC-135 Stratotankers radio callsigns “QID256 – 257 – 258” refueling fighters that are circling the area, TASMAN71 (Dassault Falcon 20) and SAR helicopter (S92 G-MOGH as “RESCUE 912”) was dispatched to the rescue of the pilot flying the Eagle that crashed. A NATO E-3 AWACS (“NATO 06”) was also supporting the operation circling to the northeast of the crash site.

A British search and rescue team has found the wreckage of a U.S. Air Force F-15C Eagle, as U.S. officials announced the pilot was dead.

The Air Force announced hours after the crash, “the pilot of the downed F-15C Eagle from the 48th Fighter Wing has been located, and confirmed deceased.”

The statement added that it was a “tragic loss” for the 48th Fighter wing community, sending condolences to the pilot’s family. The name of the pilot will not be released until all next-of-kin notifications have been made, officials added.

The cause of the accident is not yet known.

The F-15C is a single-seater version of a long-established Boeing twin-engine fighter, which has been used by the US air force since 1979.

The coastguard said it had received reports of a plane going down into the sea 74 nautical miles off Flamborough Head on the Yorkshire coast. A coastguard helicopter was sent along with Bridlington and Scarborough RNLI lifeboats.

The 48th Fighter Wing, which has operated from Lakenheath since 1960, has more than 4,500 “active-duty military members”. Its mission statement is to “provide worldwide responsive combat air power and support”. 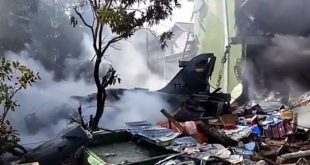