Su 57 Intercepted F35 over Syria or Did It ? Claims and Counter-claims

Su 57 Intercepted F35 over Syria or Did It? Claims and Counter-claims 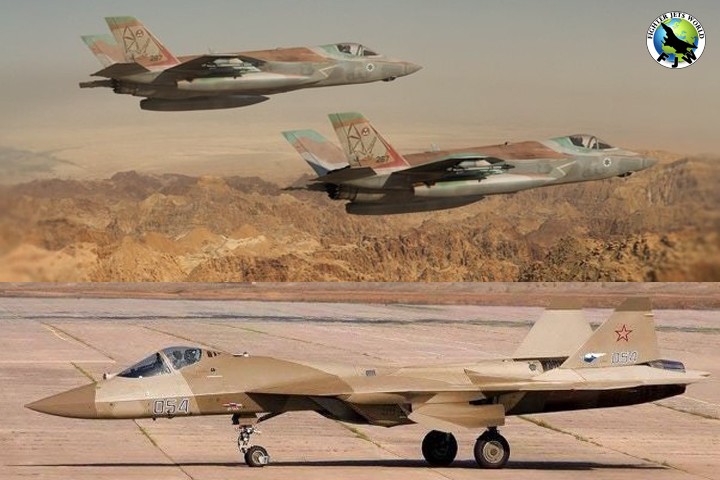 Since last few hours, a news is doing the rounds that Russian Su-57s intercepted an Israeli F-35 near Syrian airspace after which F-35I Adir had to beat a retreat back into Lebanon.

The news was broken by Chinese network newspaper ‘East Day’ claims the face-off happened on June 11, 2018. Western sources were immediate to refute the news.

According to information available, on June 11, 2018, Russian Su-57 fighters, took off from the Russian military air base ‘Khmeimim’, intercepted the Israeli fighter F-35I Adir, which flew extremely close to the border of Syria from Lebanon.

Earlier this was reported by the portal Avia.pro, but today it was reported with more details and that it was the first air interception between the Russian fifth-generation fighter aircraft and F-35 fighters.

Though Fighter Jet World doesn’t independently verifies the authenticity of the news a lot of ordinary flights gets bloated in social media, but some aviation experts have already called the first clash between the fifth-generation aircraft of two rival forces a landmark event.

“Given the fact that the Israeli pilots had to retreat, the functionality of the F-35 is not as great as reported by the Pentagon and the Ministry of Defense of Israel. It is likely that the Israeli F-35 was testing Russian and Syrian air defense systems, but no official statements have been made about this yet ,” a source on condition of anonymity concluded.

Su 57 Intercepted F35 over Syria or Did It? Claims and Counter-claims

It should be clarified that the incident itself occurred around midnight, while no aggressive actions by either Israel or Russia were noted, conveyed the sources.

Experts do not rule out that in the near future Israel will once again try to seize the opportunity to penetrate Syrian airspace using fifth-generation fighters, which will demonstrate the high capabilities of these aircrafts and will test them for the first time in real combat conditions, but modern Russian air defense systems may well be quick to respond to F -35.

On March 1, The Drive had quoted Russia’s Defense Minister Sergei Shoigu that though Russia had sent 2 Su-57s to its Khmeimim Air Base in Syria’s western Latakia governorate, they were for a brief period to test the various parameters of currently under development aircraft. The plane had returned back to Russia.

“I can say that the trials were a success and the planes returned home a week ago,” Shoigu said. “There were two planes escorted by flying laboratories and test beds monitoring the parameters of weapons work.”

After that there had been no news of redeployment of Su-57s again in Syria. So it is difficult to say at this point whether the interception by Su-57 of F-35I Adir is mere propaganda or there is actually some reality to it. Recently there had been a series of news reports in Western Media of myriads of problems that F-35 programme is trying to overcome. So this news of F-35 interception by Su-57 could be a further attempt to buttress the point that Russian planes are superior to Americans. Whatever be the truth it has given some thrilling fresh ammo for aviation lovers to wag their tongues on.

Tags Su 57 Intercepted F35 over Syria or Did It? Claims and Counter-claims ussian Su-57s intercepted an Israeli F-35 near Syrian airspace after which F-35I Adir had to beat a retreat back into Lebanon