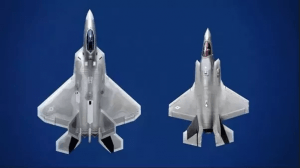 F-22 Raptor and the F-35 Lightning II are US most advanced sophisticated, maneuverable and stealthy fighter jets in the World but Unfortunately, they have a difficult time communicating with each other.

The Raptor’s Intra-Flight Data Link (IFDL) is compatible with F-15 Eagles and other older aircraft, but the F-35’s Tactical 16 Link communication system is not fully interoperable with IFDL. Raptor’s communications set up can accept data from the F-35, F-16, and Eurofighter, but it cannot relay a single bit of the swaths of situational data back to the other aircraft.

For now, the pilots have adopted a secure voice link as a temporary measure, but the F-22 is not slated to get the Tactical Link 16 upgrade until 2023. According to Billie Flynn, a former Royal Canadian Air Force squadron commander who now works as an F-35 test pilot for Lockheed Martin, the temporary solution has been adequate during training and simulated combat.

“The thing that’s great about having Link 16 and MADL onboard and the sensor fusion is the amount of situational awareness the pilot has,” Lt. Col. George Watkins, a squadron commander, said in an Air Force statement last year. “I can see the whole war, and where all the other players are, from a god’s-eye view. That makes me a lot more effective.”

“We don’t have data anymore,” said Flynn, a former squadron commander for the Royal Canadian Air Force. “We have knowledge.”

While these two fighters have a ways to go until they share the same communications and sensor systems, there’s at least one thing they already have in common: they’re budget busters. The Raptor is the most expensive aircraft in the U.S. arsenal, in terms of cost per flight hour; the program ended up costing taxpayers more than $330 million per unit.

Operating and maintenance costs have grown daunting for the F-35 as well. The Air Force may need to cut almost 600 from its planned order of 1,763 if upkeep costs can’t be lowered by more than a third. It also faces annual maintenance costs of almost $4 billion for a fighter fleet that’s likely to top $1 trillion in sustainment through 2070 across the three service branches.

Previous An “Easter miracle” 50 year old Sydney plane crash survivor women walked away from the wreckage After his plane crashed from 1,000 feet
Next Light aircraft crashed in a field in West Melton , Canterbury