Why Buy A Bugatti Centodieci When You Can Have F-16 Fighter Jet For Less? 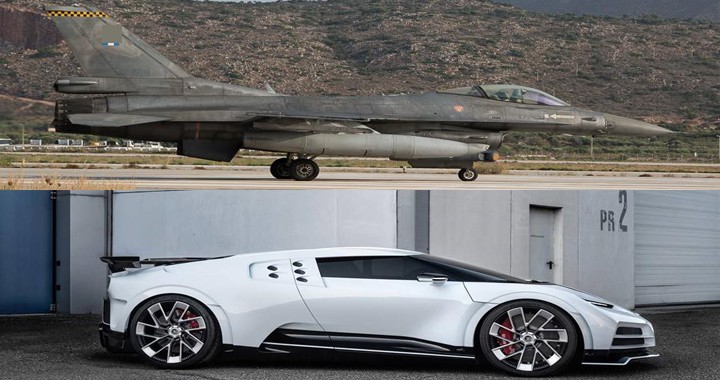 An article published on jalopnik shows that now you can  buy a Bugatti Centodieci for less price then a F-16 Fighter Jet.

Jokes aside, the Centodieci’s spec claims are as outrageous as is asking price. The 16-cylinder engine supposedly makes 1,600 horsepower. 1,600 horsepower. Bugatti promises all that energy translates to a 0 to 124 mph sprint in 6.1 seconds. Top speed’s posted at 236 mph, and the only thing keeping it that low is an electronic limiter.

An F-16, well, it’s considerably faster but it’s not as user-friendly.

So if you have a option to chose between Bugatti Centodieci or F-16 fighting falcon Fighter Jet. Which one you will chose? Lets us know in the comment section

The Bugatti EB 110 is a mid-engine sports car produced by Bugatti Automobili S.p.A. from 1991 to 1995, when the company was liquidated. It was the only production model made by Romano Artioli’s Italian incarnation of Bugatti.

The General Dynamics F-16 Fighting Falcon is a single-engine supersonic multirole fighter aircraft originally developed by General Dynamics (now Lockheed Martin) for the United States Air Force (USAF). Over 4,600 aircraft have been built since production was approved in 1976.