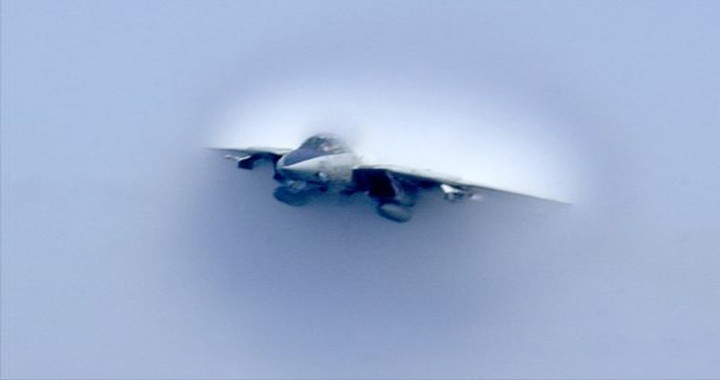 This video shows an F-14 Tomcat Explode and Crash after a Supersonic Pass of The USS John Paul Jones.

“On 20 September 1995, an F-14A Tomcat fighter jet crashed in the vicinity of John Paul Jones.

A fly-by at supersonic speed was performed, during which the engine exploded (due to “compression failure”) 55 miles away from the carrier, USS Abraham Lincoln.

Both pilot and Weapons Systems Operator ejected and survived with only minor 2nd degree burns.”

An extract from the declassified accident report states

USS John Paul Jones is a part of the Abraham Lincoln Battle Group.

The aircraft was from Fighter Squadron 213 (VF-213), based at Naval Air Station Miramar, Calif.

The squadron is part of Carrier Airwing 11.

A helicopter from Helicopter Anti-submarine Squadron (HS-6) Based at Naval Air Station North Island, San Diego, returned the air crew to Abraham Lincoln.” The link to the relevant

The F-14 was the first of the American teen-series fighters, which were designed for incorporating air combat experience against MiG fighters during the Vietnam War.

which enabled it to both serve as escort attack aircraft when armed with Sparrow missiles and fleet air defense loitering interceptor role when armed with Phoenix missiles.

The F-14 was designed with a two-seat cockpit with a bubble canopy which affords all-around visibility aiding aircrew in air-to-air combat.

It features variable geometry wings that swing automatically during flight.

For high-speed intercept, they are swept back and they swing forward for lower speed flight.

It is mounted on the left side and can carry AIM-54 Phoenix, AIM-7 Sparrow, and AIM-9 Sidewinder anti-aircraft missiles