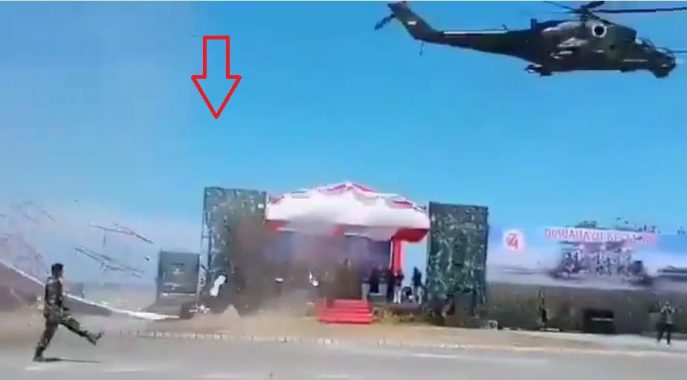 An Indonesian Army Mi-35P gunship helicopter made an unanticipated low pass over the VIP podium at the 74th-anniversary Indonesian army parade.

Seconds later, the entire installation collapses like a house of cards as the powerful aircraft makes the devastating fly-by.

Fortunately, no one was hurt at the parade marking the 74th anniversary of the Indonesian armed forces.

While the rest of Indonesia’s military anniversary display was indeed impressive, this incident looks likely to steal the show.

Possibly, the crew of an Indonesian Mi-35P Gunship was inspired by the tower fly-by scene in “Top Gun”, or, maybe they never saw it and failed to anticipate what would happen if they decided to “buzz the bandstand” like a rotary wing version of Maverick and Goose. The result was a little more than spilled coffee.

The country’s army uses six Mi-35s, with more to come under a Russian-Indonesian defense deal.

The two-seat helicopter is the latest upgrade of the battle-tested Mi-24 Hind helicopter, which has seen action in numerous conflicts across the Middle East, Africa, and Latin America.