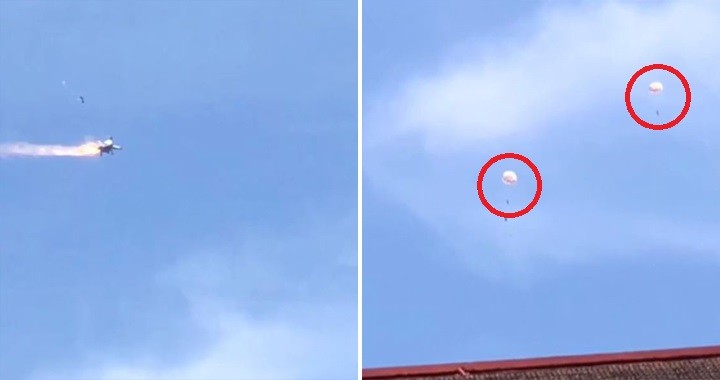 As we have reported earlier that an Indian Navy Mig-29KUB fighter jet crashed under unknown circumstances shortly after it took off on a routine training mission from Goa’s Dabolim.

Last Saturday’s crash of an Indian Navy MiG-29KUB fighter in Goa was captured by several citizens on the ground, but none had apparently captured the actual ejection of the two pilots Capt M Sheokhand and Lt Cdr Deepak Yadav.

A new clip has now emerged depicting the actual punch-out in the first crash of the type in Indian Navy service.

livefistdefence has shared the video of ejection. Here is the video: Link

The accident, currently being investigated by a crash inquiry team, was caused by a bird hit shortly after the jet, from the INAS 300 ‘White Tigers’ squadron, took off from the INS Hansa naval airfield, part of Goa’s Dabolim airport.

Both pilots, including White Tigers CO Shekhand, were rescued by locals in Verna, the area where the aircraft impacted the ground, and were later airlifted to the base hospital in a Dhruv helicopter. The two men are in good condition and are likely to be discharged from hospital shortly.

One of the pilot calling buddy to inform authorities he has ejected but fine aftr #mig29 K crash in #Goa today pic.twitter.com/hkGRjWGHZ6

The Indian Navy operates 2 squadrons of the MiG-29K and was, in fact, the launch customer of the type. The first batch of jets was commissioned into service in May 2013. Like the Sea Harriers before them, the MiG-29Ks are the only carrier-borne combat aircraft with the Indian Navy at present. Last year, the Indian Navy showed off its Fulcrums in this excellent shoot.