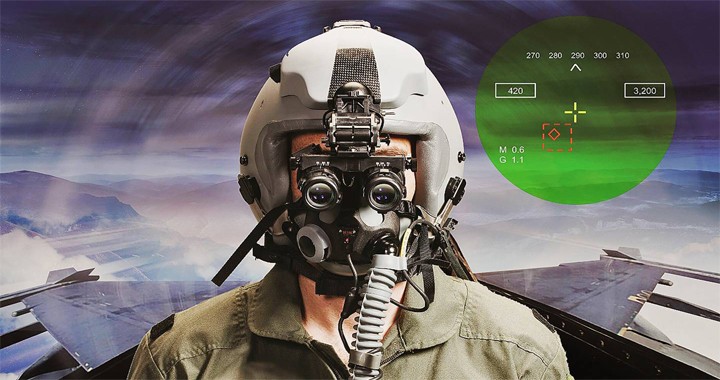 Combat pilots flying at night have used specialized aviator’s night vision goggles (ANVIS) for many years. While ANVIS solutions are highly useful for helicopter pilots, fighter pilots flying fast jets that use ANVIS lack the advanced capabilities they are accustomed to, when flying in daylight with Joint Helmet Mounted Cueing Systems (JHMCS).

Recognizing the aviator’s need for advanced nighttime cueing and display capabilities, Elbit Systems of America, the original developer, and manufacturer of JHMCS, has developed the ‘Digital Eye Piece’ (DEP), a lightweight night vision applique designed specifically for the JHMCS

As a lightweight night vision cueing and display solution for the JHMCS, DEP brings daytime cueing and display capabilities into night operations without the need for costly upgrades, modifications or changes to the aircraft or software.

During initial trials, Elbit describes their adaptation and pilots’ experiences with it as such in an official release:

This unique add-on solution transforms existing HMDs and Night Vision Goggles (NVGs) into highly advanced, cutting-edge night vision smart helmets, providing pilots with daytime cueing and display capabilities in their night operations. Its seamless integration requires no changes to aircraft installation or software. The DEP is a simple and cost-effective plug-and-play solution that enables pilots to transition from day to night configuration, improves situational awareness and meets the operational needs of military aviators.

DEP can be installed onboard any fielded JHMCS, D-JHMCS or JHMCS-II. The goal of the flights was to demonstrate the system’s performance in night flight, including A/A and A/G scenarios, in which effective flight missions generally cannot be executed. A variety of international Air Forces participated in flights onboard their F-16 aircraft. Feedback was very positive and the pilots emphasized the contribution of the system tonight flight safety and effectiveness. Pilot feedback included: “the DEP improves situational awareness and reduces workload”… “the system improves night identification capabilities”… “the DEP provides more flexibility and better situational awareness for close air support”. 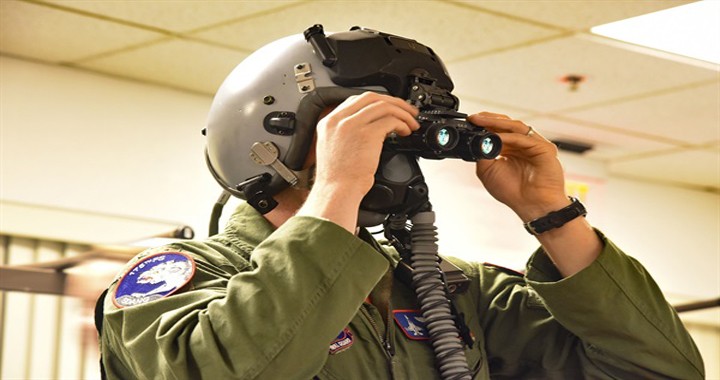 Now the system is being fielded in large quantities to Air Force, Navy, and Marine fleet pilots and has already been used during combat operations in the Middle East. The 114th Fighter Wing, an Air National Guard unit flying Block 40 F-16CGs out of Sioux Falls, South Dakota, better known as the “Lobos,” was one of the latest units that put the system to the test. Major Jeremy Doohen, one of the wing’s pilots, stated the following about his experience with the new system:

While the system doesn’t provide anywhere near the whiz-bang tech that the infamous F-35’s helmet does, which is deeply integrated into the jet’s design, adding a DEP that is built specifically for JHMCS equipped aircraft and can be slapped on existing NVGs, is a somewhat refreshing solution to a complex problem. It’s also one that likely costs far less than deploying a whole new helmet mounted display system and its required infrastructure altogether.

Going forward, American fighter pilots flying 4th generation fighters can feel confident that the long-established U.S. military adage “we own the night” still holds water, and the ability to kill your enemy simply by looking at them even after the sun goes down thanks to the DEP certainly supports that statement.