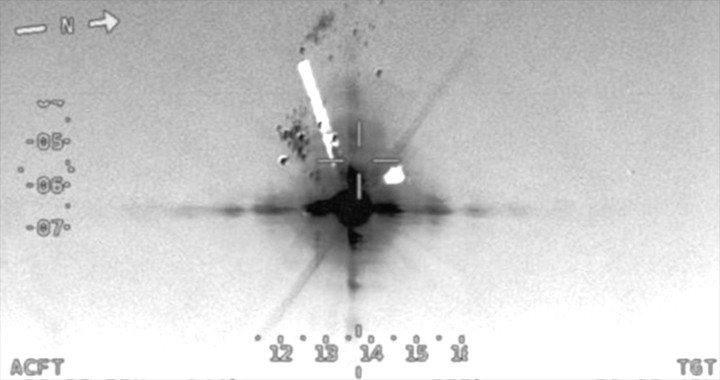 The U.S. military confirmed on Thursday that one of its drones was shot down and said the incident took place in international airspace, challenging Iran’s account that the U.S. aircraft had been flying over Iranian territory.

The smoke trail of a U.S. Navy drone that was shot out of the sky over the Strait of Hormuz by Iran can be seen in the video released by the Pentagon on Thursday as tensions escalated over what military officials described as an “unprovoked attack.”

Pentagon releases video purporting to show the smoke trail left after a U.S. RQ-4 unmanned aerial vehicle was shot down by Iran over the Gulf of Oman pic.twitter.com/cry6WpwdrT

The unmanned aircraft with a wingspan larger than a Boeing 737 jetliner, was brought down by an Iranian Islamic Revolutionary Guard Corps surface-to-air missile that was fired from near Goruk, Iran on Wednesday night, according to Lt. Gen. Joseph Guastella, head of U.S. Air Forces Central Command.

“This was an unprovoked attack on a U.S. surveillance asset that had not violated Iranian airspace at any time during its mission,” Guastella said. “This attack is an attempt to disrupt our ability to monitor the area following recent threats to international shipping and free flow of commerce.”

Guastella said at the time it was struck by the missile, the drone was operating at a “high-altitude” approximately 34 kilometers from the nearest point of land on the Iranian coast.

Iranian Foreign Minister Zarif rejected the claim, saying on Twitter on that the United States is lying over its drone being hit in international waters, saying Tehran will take the matter to the United Nations.

The American drone that was shot down had taken off from the United Arab Emirates.

We've retrieved sections of the US military drone in OUR territorial waters where it was shot down. pic.twitter.com/pJ34Tysmsg

Earlier, Trump made his first statement on the incident on Twitter, only writing, “Iran made a very big mistake!” In May 2019, Trump had warned Iran about threatening the United States, “If Iran wants to fight, that will be the official end of Iran. Never threaten the United States again!”

“Iranian reports that the aircraft was over Iran are false,” said Navy Captain Bill Urban, a spokesman for the U.S. military’s Central Command.