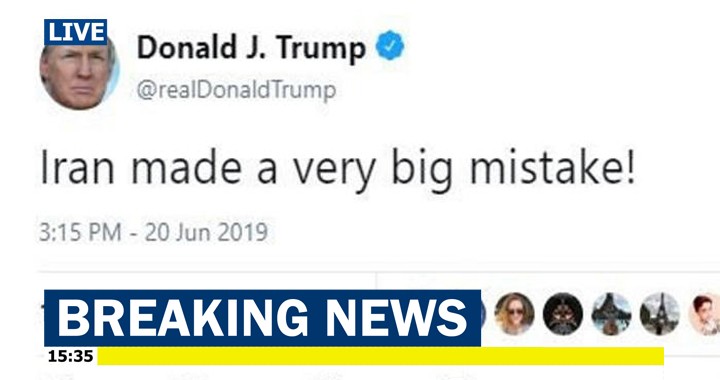 President Donald Trump tweeted on Thursday that Iran made a “very big mistake” when its forces shot down a US drone.

Iran made a very big mistake!

The tweet comes as more and more US firepower moves into US Central Command to confront Iran, and after warnings the US has made against Iran. Many experts believe the US and Iran are on a collision course as tensions rise.

President Donald Trump on Thursday said the public would “soon find out” if the US would launch a military strike against Iran after it shot down a US Navy drone.

But the president also said he found it “hard to believe” that the downing of the drone was “intentional,” despite the fact Iran claimed responsibility. He floated the possibility an Iranian general made a “mistake” in shooting down the drone.

When asked if he was willing to go to war with Iran, Trump said, “You’ll find out.”

JUST IN: Asked whether he would strike Iran in retaliation for downing a US drone, Pres. Trump says: “You’ll soon find out.” https://t.co/7VO0Jne8eT pic.twitter.com/HH6ZQhT0qP