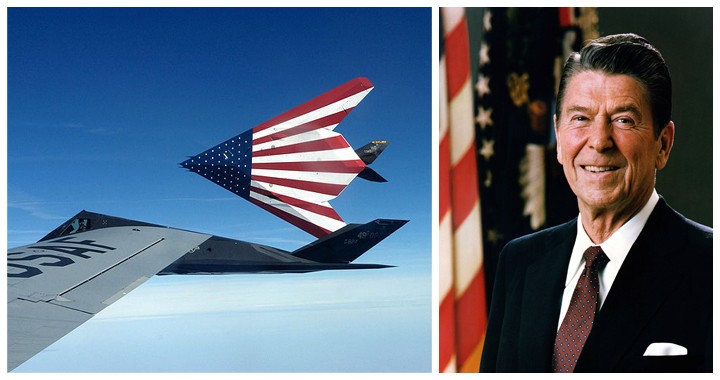 As we have Reported earlier a Mysterious F-117 Nighthawk Fuselage Under Protective Cover was Spotted in Transit in California.

According to The War Zone Report More than a decade after the F-117 Nighthawk stealth attack jet’s official retirement, the Air Force still has 51 of the aircraft in its inventory and has not destroyed any of the aircraft since 2008, despite a Congressional mandate two years ago to dispose of four of them annually. The remaining Nighthawks are still at the secretive Tonopah Test Range Airport in Nevada.

Now according to the latest The war zone article, the U.S. Air Force has permanently loaned one of its remaining F-117A Nighthawk stealth combat aircraft to the Reagan Presidential Foundation, for eventual display at the Ronald Reagan Presidential Library and Museum in Simi Valley, California.

The stealth attack plane will join other aircraft at the museum, including a VC-137C Air Force One jet, F-14 Tomcat, and a VH-3 Marine One helicopter.

The F-117A Nighthawk destined for the Reagan Presidential Library is one of a dozen the National Museum of the U.S. Air Force, or NMUSAF, has set aside to demilitarize and deeply modify so that it can loan them to museums, including those within the service itself, as part of the U.S. Air Force Heritage Program, Brian Bracken.

NMUSAF has already taken delivery of its own F-117, which joins a pre-production YF-117 in that museum’s collection. Another 51 Nighthawks are still at the secretive Tonopah Test Range Airport in Nevada and the service eventually plans to physically destroy the remaining 40 examples per Congressional mandate.

Development of the F-117 and its immediate predecessors certainly predates Reagan’s administration. President Reagan was a major proponent of the then top-secret F-117 program, at one point even personally inviting the United Kingdom to become a partner in it.

The Lockheed F-117 Nighthawk is an American single-seat, twin-engine stealth attack aircraft that was developed by Lockheed’s secretive Skunk Works division and operated by the United States Air Force (USAF). The F-117 was based on the Have Blue technology demonstrator.

The Nighthawk was the first operational aircraft to be designed around stealth technology. Its maiden flight took place in 1981 at Groom Lake, Nevada, and the aircraft achieved initial operating capability status in 1983.

The Nighthawk was shrouded in secrecy until it was revealed to the public in 1988. Of the 64 F-117s built, 59 were production versions, with the other five being prototypes.