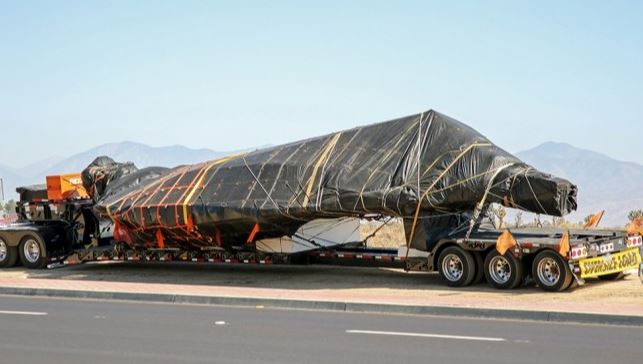 on Aug. 16, 2019 at 4:09 PM a California based aviation expert and photographer Chris McGreevy Spotted Mysterious F-117 Nighthawk Fuselage Under Protective Cover near the joint military/civilian use Palmdale Regional Airport outside Palmdale, California.

“It was just outside USAF Plant 42 in Palmdale Ca. I’m guessing they trucked it down from Tonopah to Palmdale so it can be demilitarized and eventually be put on display somewhere.

Removing all the avionics, internals, RAM and hollowing her out. Given it is disassembled, I’m guessing this airframe is one of the ones that have been stored in the climate controlled hangars at Tonopah,” McGreevy told TheAviationist.

These new photos from Chris McGreevy, likely of an F-117 being transported to a facility for preparation before being placed on static display, add more interest to the story surrounding the still mysterious “black jet”.

McGreevy, who is very experienced with aviation scanners, aircraft photography and knows the most interesting aviation spotting areas of the American west well, saw a large flatbed truck hauling what is almost certainly the fuselage of a Lockheed F-117 Nighthawk.

The Lockheed F-117 Nighthawk is an American single-seat, twin-engine stealth attack aircraft that was developed by Lockheed’s secretive Skunk Works division and operated by the United States Air Force (USAF).

The Nighthawk was the first operational aircraft to be designed around stealth technology. Its maiden flight took place in 1981 at Groom Lake, Nevada, and the aircraft achieved initial operating capability status in 1983. The Nighthawk was shrouded in secrecy until it was revealed to the public in 1988.

Of the 64 F-117s built, 59 were production versions, with the other five being prototypes.

The F-117 was “officially” retired back in April, 2008. However, some isolated accounts suggested the aircraft may have participated in advanced testing in the classified test ranges north of Las Vegas in the American west. Some stories claim the aircraft was actually re-introduced to combat in Syria and Iraq in 2017, although these claims have never been substantiated.

Previous USS Boxer sailed through the Strait of Hormuz with an armored vehicle ready to fight off Iranian gunboats
Next Why Elon Musk Wants to Drop Nuclear Bombs on Mars?