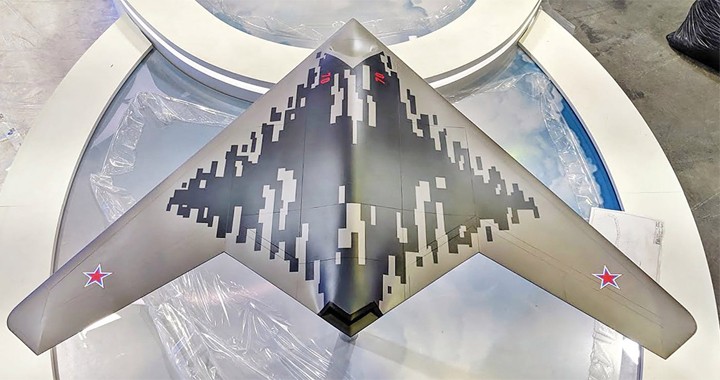 on May 16, 2019, Russian President Vladimir Putin flew to the country’s southwestern region at Military Test Facility.  The satellite image of the flight line at the test centre subsequently appeared on social media, showing the unmanned Sukhoi’s S-70 Hunter-B (Okhotnik-B) combat air vehicle (UCAV) next to an Su-57 and other aircraft, including an Su-34, a MiG-29, and multiple Sukhoi Flanker variants.

New pictures Stealthier Vision Of Sukhoi’s S-70 Hunter-B (Okhotnik-B) UCAV at MAKS Air show appeared at The War Zone obtained from the Sukhoi pavilion at Russia’s biennial MAKS air show and weapons expo on the outskirts of Moscow show us what the company envisions the Hunter to finally look like once it fully matures.

The photos of the model depict an evolved Hunter that is devoid of the multiple antennas, small air inlets and exhaust vents, air data probes, and other structures that currently pockmark its skin. 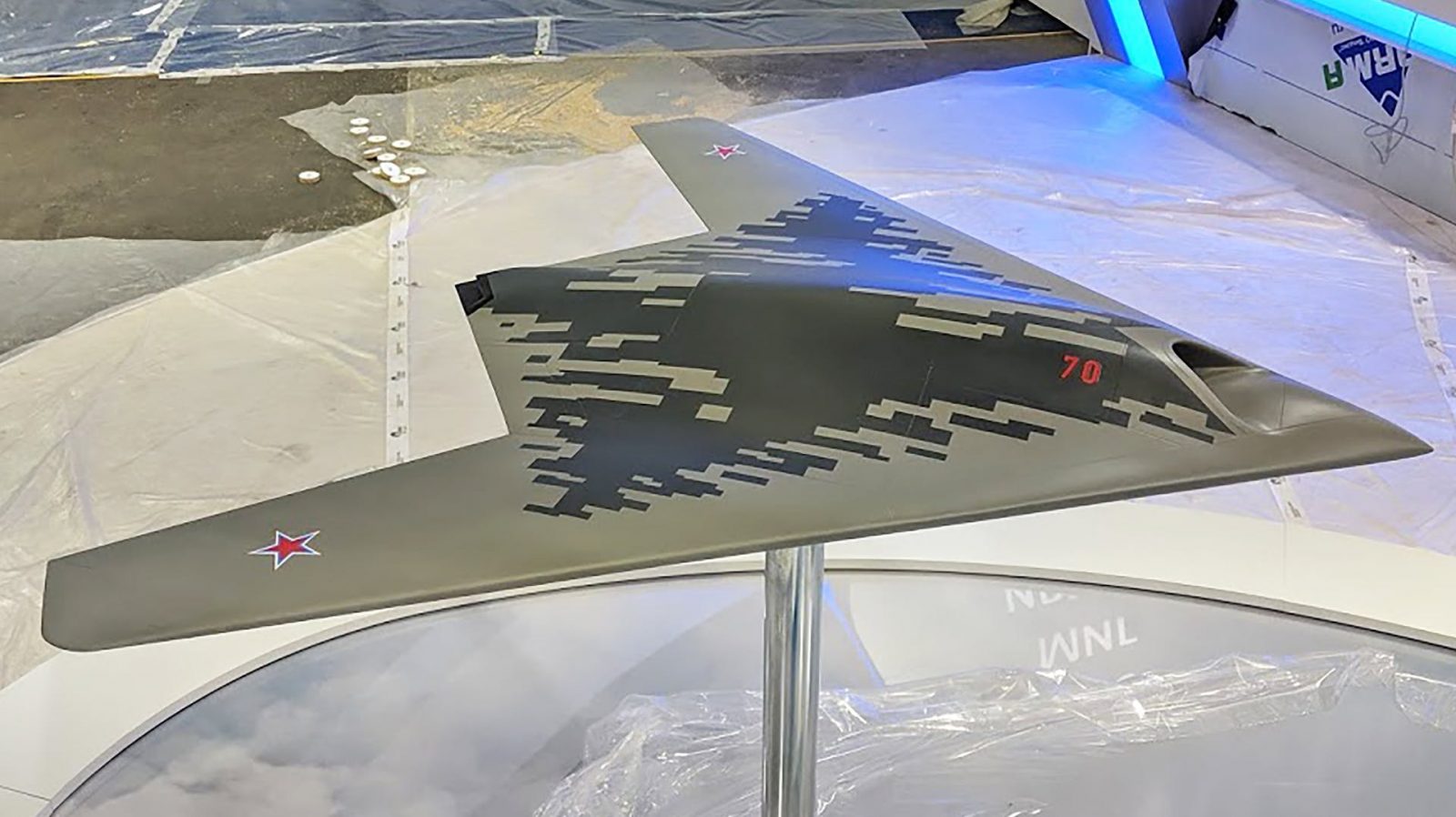 This is not all that surprising as it is common to fit those systems in the most reliable and easiest way possible for a stealthy drone’s early development. America’s X-47B also had a similar configuration in this regard and its production version would have been significantly modified to maximize low-observability. 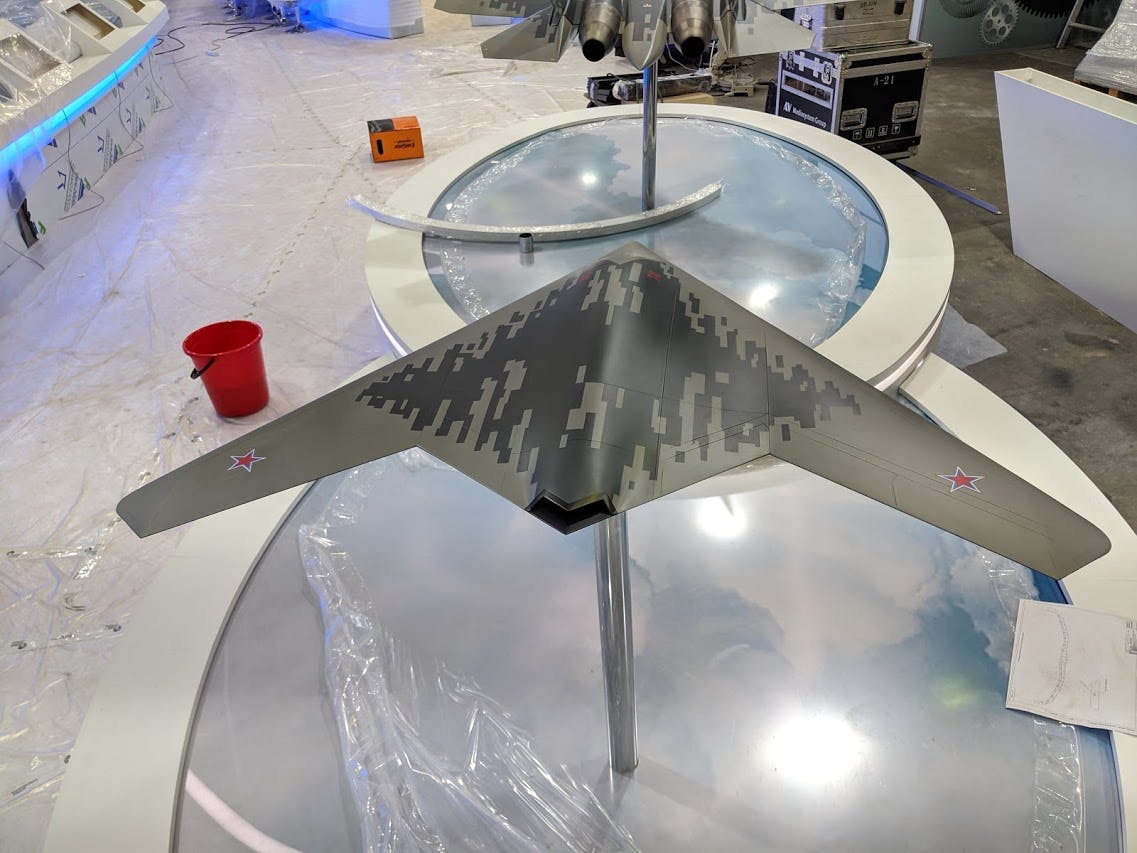 See more images at The Warzone

The craft itself looks fairly impressive and substantial in size with a hardy landing gear that looks similar to those used on modern Russian tactical jet designs. The configuration appears to be loosely similar to something between Northrop Grumman’s X-47B and Boeing’s X-45C Phantom Ray, as well as other international UCAV designs. Its dimensions appear to be loosely analogous to Northrop Grumman’s X-47B, if not larger in terms of wingspan as it doesn’t appear to feature the X-47B’s ‘cranked kite’ planform. The X-47B was roughly 38 feet long with a 62 foot wingspan.

The aircraft is powered by a full-sized fighter jet engine that could potentially include afterburning capability based on the nozzle installation. This would be helpful for taking off at high gross weights, but beyond that, it would have questionable utility.

The engine being used is unknown, but the Saturn AL-31F series used by the Flanker family of aircraft would be a logical choice. It is possible that a derivative of the more powerful AL-41F that is still somewhat in development could be used in the future, which may eliminate the need for an afterburner.

Russian state media stated that a contract on developing the stealthy unmanned strike aircraft Okhotnik weighing 20 tonnes was signed between Russia’s Defense Ministry and the Sukhoi Aircraft Company in 2011.

“The work on the heavy long-range unmanned aerial vehicle is at the concluding stage. In particular, work has been completed to create a prototype that will begin test flights this year,” the TASS reported.

“The work is being carried out at the Novosibirsk-based Chkalov Aviation Plant (part of the Sukhoi Aircraft Company),” the source added.

The Su-70 Hunter-B is a large RPA weighing nearly “20 tons” according to reports, of almost twice the weight of a U.S.-built F-16 Fighting Falcon. A noteworthy feature of the new Su-70 is its conventionally configured, round exhaust system. U.S. UCAV/RPA designs such as the Northop Grumman X-47B, feature a flat, louvered exhaust configuration to reduce both radar cross section (RCS) to enhance low-observability and to moderate the aircraft’s infra-red (IR) heat signature. This round exhaust is seemingly contradictory to the design cues on the forward intake of the Su-70, a trapezoidal engine inlet that appears to be configured to hide the engine fan blades from radar reflection from the bottom/front of the aircraft to enhance stealth. Several sources also suggest the aircraft is made primarily of composite material, a likely additional low-observable feature.