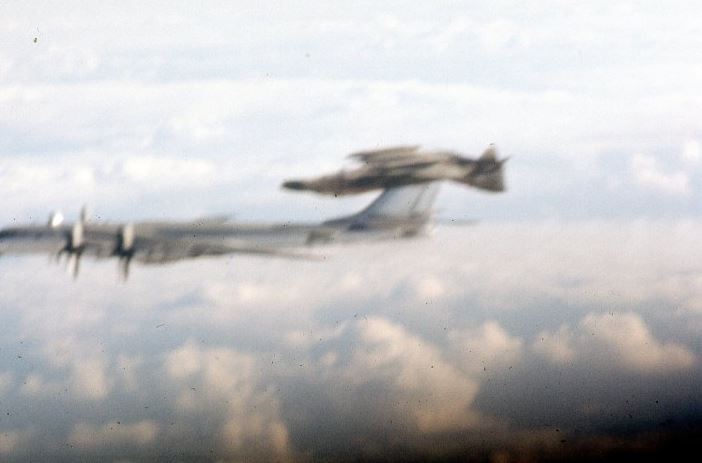 The blurry photograph in the post shows an F-4 Phantom flying inverted during an intercept/escort mission on a Russian Tu-95 Bear. The image brought to mind one of the most famous scenes in Top Gun movie.

The photograph was shot by Robert M. Sihler, who was so kind to provide some interesting details about the image in an interview to The aviationist.

“Although I don’t remember the exact date, the mission occurred in either late 1973 or early 1974.  The F-4C belonged to the 57th FIS at Keflavik NAS.  The mission was a standard intercept of a “Bear” by two F-4s after the alert crews were activated,” Bob wrote in an email to The Aviationist.

“I was a Navigator, or in the F-4, a Weapons System Officer. I entered the USAF in Oct 1969. On active duty, I spent a couple of years at Norton AFB, CA in C-141s. From there, I trained in the F-4 and spent one year at Keflavik, Iceland. Following that, I went back to C-141s at Charleston AFB, SC from 1974 to 1977. I left active duty and spent the next 14 years in C-130s at Andrews AFB, MD and Martinsburg ANGB, WV. I retired as a Lt Col in Dec 1991. The assignments to Iceland were generally either one or two years. I elected to do one year without my family accompanying me there. Others chose to bring their families for two years.”

Dealing with the close encounters with the Tu-95s:

“At that time, we probably averaged two intercepts of “Bears” per week. They were the only aircraft we saw while I was there. Generally, the intercepts occurred on Fridays and Sundays, at the “Bears” flew from Murmansk to Cuba on training and, we guessed, “fun” missions. Generally, we did these barrel rolls at the request of the Soviet crewmembers.  They gave us hand signals to let us know they wanted us to do it.  They photographed us as well.  The Cold War was winding down and the attitudes on both sides had improved,” Sihler explains.

When asked whether the barrel roll was difficult or unsafe maneuver, Bob has no doubts: “Not really!  The Soviets, at the time, gave us hand signals asking us to “perform” for them. The rolls were not dangerous at all.”

In the last few years, we have often reported about “unsafe and unprofessional” intercepts conducted across the world by Russian (and Chinese) fighter jets scrambled to identify and escort U.S. spyplanes flying in international airspace.

Barrel rolls, aggressive turns that disturbed the controllability of the “zombie” (intercepted aircraft in fighter pilot’s jargon), inverted flight: if you use the search function on this site you can read of several such incidents that made the news on media all around the world.